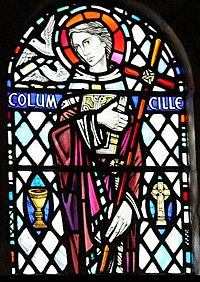 Saint Columba (Irish Colm Cille, "Columb of the Church"[1]; 7 December, 521–9 June, 597[2]) was an Irish priest and missionary.[3] He left Ireland in 563 AD on his mission to bring Christianity to Dál Riata, now western Scotland.[4] He built the famous monastery on the Island of Iona which became known as a "holy island'.[4]

Columba was born on December 7, 521 A.D. in Gartan, County Donegal.[3] His his father was Fedhlimidh, a great-grandson of Niall of the Nine Hostages, 4th century High King of Ireland.[5] His mother was Eithne of the Uí Néill clan.[3] She was a member of the royal family of Leinster.[5] While still young he decided on a monastic life. He was educated in Ireland at schools in Moville, Glasnevin and Clonard Abbey.[6] He founded the Irish monasteries at Derry and at Durrow, County Offaly.[6]

In about 563 AD, Columba and his followers left Donegal by boat and traveled to the island of Iona off the west coast of Scotland.[7] His mission to Scotland may have been more a case of penance for a battle he may have caused.[8] He refused to return a copy of the Gospels he had copied without permission. He upset the king of Ireland by his refusal, which led to a battle won by his clan.[8] Columba felt remorse over the deaths this caused.[8] Once there he and his monks began the religious conversion of most of Scotland which at that time was pagan.[8] Their fame and influence spread to most of Europe. It became a place of pilgrimage. It also became known as a holy island where 48 kings of Scotland, 4 kings of Ireland and 8 kings of Norway are buried.[8] In 597 Comumba died on Iona.[9] Books on his life began being written a century later. The best known of these was written by Adomnán sometime between 697 and 700. He was proclaimed a saint before the modern process of canonization.