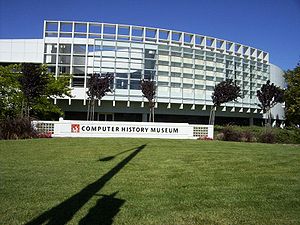 A computer museum is a museum for the study of historic computer hardware and software. The International Council of Museums defines a "museum" as a "permanent institution in the service of society and of its development, open to the public, which acquires, conserves, researches, communicates, and exhibits the tangible and intangible heritage of humanity and its environment, for the purposes of education, study, and enjoyment".[1]

Some computer museums are a part of larger institutions. For example, the Science Museum in London and the Deutsches Museum in Munich. Others, such as the Computer History Museum in Mountain View, California, the MuseumsForum in Paderborn, and The National Museum of Computing at Bletchley Park, deal only with computing. Some deal mainly in the early history of computing. Others focus in the era that started with the first personal computers such as the Apple I, Altair 8800, Apple IIs, older Apple Macintoshes, Commodore Internationals, Amigas, IBM PCs and more rare computers such as the Osborne 1. Some deal more on research and conservation. Some museums are for computer education and entertainment. There are also private collections.

The term 'museum' has grown in common usage to include online collections, in much the same way other activities have made the change ('Online shopping', 'Online Gallery' etc.). Online Museums range in type and quality from those that collate and preserve material to those that simply show photographs of hardware from other sources. They are different from traditional museums mainly in that the exhibits can not be touched or interacted with in the traditional sense.