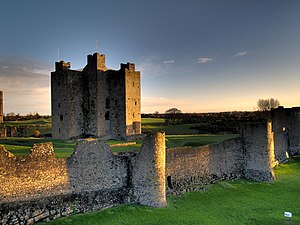 County Meath (Irish: Contae na Mí) is a county in Ireland. It is part of the province of Leinster. It is named after the ancient Kingdom of Mide (in Gaelic Mide means "middle"). 184,135 people lived in the county according to the 2011 census.[1] The county town is Navan, this is where the county hall and government are located. Trim used to be the county town.

The River Boyne flows through the county.

The county is sometimes known by the nickname "The Royal County" because of its history as the seat of the High King of Ireland.[2][3][4]

County Meath formed the eastern part of the former Kingdom of Mide. The seat of the High King of Ireland was at Tara which is not far from Navan.

The archaeological complex of Brú na Bóinne is 5,000 years old. It includes the burial sites of Newgrange, Knowth and Dowth, in the north-east of the county. It is a UNESCO designated World Heritage Site.

The county has a lot of farms, mainly cattle, dairying, potatoes and grain. Meath is Ireland's leading county producer of potatoes, and a significant producer of beef, barley, milk, wheat, and root vegetables. Europe's largest underground lead-zinc mine, Tara Mines, has operated since 1977, at a location to the west of Navan.