Daikoku, the God of Wealth in Taoism

In Japan, Daikokuten (大黒天), is one of the Seven Lucky Gods. Daikokuten came from the Indian god, Shiva. Daikoku wears Japanese robes and has a happy and smiling personality.

Daikoku's pictures are found in the temples of Tibet and China and the god enjoys a high position as a household god in Japan. Daikoku's connection with wealth and success started a strange ritual known as Fuku-nusubi. This ritual started with the belief that the person who stole figures of gods and goddesses was promised good luck, if they were not caught while stealing. Eventually, stealing divine figures became so common that the Toshi-no-ichi or the ‘year-end-market’ held in the Asakusa Kannon temple became the main place where the sale of these images was held.

Daikoku is considered to be the god of wealth or the household, mostly the kitchen. He is recognised from his wide face, smile, and a flat black hat. He is often shown holding a golden mallet and sitting on bales of rice. 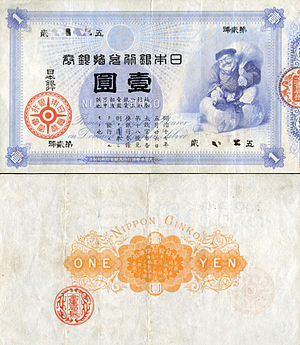 An old one-yen bank note, first issued in 1885, with a picture of Daikokuten.