KidzSearch Safe Wikipedia for Kids.
(Redirected from Dallas, Texas)
Jump to: navigation, search
This page is about the city. For the television series, see Dallas (TV series). 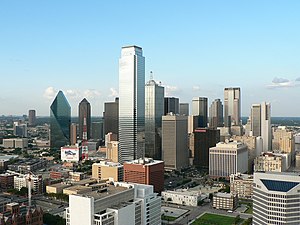 Dallas is a large city in the northern part of the U.S. Of Texas. It is a part of a much larger group of cities called the Metroplex, along with important cities like Arlington, Denton, Fort Worth, and Plano. The city is one of the largest in the United States.

The city of Dallas was started in 1841[1] by John Neely Bryan.[2] Over time, it grew into a large city with many companies. In 1915, Southern Methodist University opened in Dallas. On November 22, 1963, United States President John F. Kennedy was shot and killed in Dallas.

Dallas has a humid subtropical climate (Cfa in the Koeppen climate classification).