Derby is a city in the East Midlands region of England. It is on the banks of the River Derwent in the south of Derbyshire. In the 2001 census, 233,700 people lived there. At that time, Derby was the 18th largest place in England.[1]

The city has Roman, Saxon and Viking origins.

The Roman camp of 'Derventio' was probably near to Derby. The site of the old Roman fort is at Chester Green. Later the town was one of the 'Five Boroughs' of the Danelaw.

Modern research into the history and archaeology of Derby has shown that the Vikings and Anglo-Saxons probably co-existed, occupying two areas of land surrounded by water. The Anglo-Saxon Chronicle (c. 900) says that "Derby is divided by water". These areas of land were known as Norþworþig and Deoraby, and were at the "Irongate" (north) side of Derby.[2]

In World War I, Derby was targeted by German Zeppelin air bombers. They killed five people in a 1916 raid on the town.

All Saints Church was designated as a cathedral in 1927. That showed that the town was ready for city status.

In the 1920s and 1930s, slums were cleared out and people were moved to new council estates in the suburbs. There were also houses for sale there. Rehousing, council house building and private housing developments continued on a large scale for some 30 years after the end of World War II in 1945.[3]

Derby became a high profile town internationally in sport following the appointment of Brian Clough as manager of Derby County F.C. in 1967. Promotion to the Football League First Division was achieved in 1969, and County won of the English league three years later. Following the Clough's resignation in 1973, his successor guided County to another league title in 1975, but this is the club's last major trophy to date; relegation followed in 1980 and top flight status was not regained until 1987, since when Derby have spent a total of 10 seasons (across two spells) in the top flight. The club moved from its century-old Baseball Ground in 1997 to the new Pride Park Stadium.[4]

Derby was awarded city status on 7 June 1977 by Queen Elizabeth II.[5] Until then, Derby had been one of the few towns in England with a cathedral but not city status.

Despite its strategic industries (rail and aero-engine), Derby suffered comparatively little damage in both world wars (contrast Bristol and Filton). This may in part have been due to the jamming of the German radio-beam navigations systems (X-Verfahren and Knickebein), camouflage and decoy techniques ('Starfish sites') were built, mainly south of the town, e.g. out in fields near Foremark.[6] 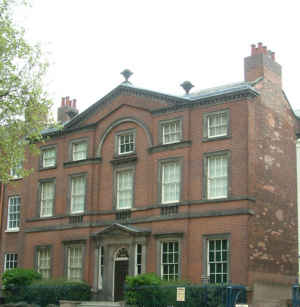 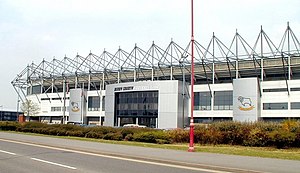 Derby's main football club is Derby County who've won the FA Cup and the Football League. There are also three senior non-league football clubs based in the city. Derby also had a short lived baseball team, which played at Derby's former ground.

Arthur Keily the marathon runner and Olympian was born in Derbyshire in 1921 and has lived his whole life in Derby. In Rome in 1960 he broke the English Olympic record, recording a time of 2hours 27mins.[7][8]

Derby has the first public park in the country to have an arboretum, which is south of the city centre. The arboretum was set up by the philanthropic landowner and industrialist Joseph Strutt in 1840. The arboretum's website states that the arboretum's design was the inspiration for the vision of great urban parks in the USA, notably Central Park in New York City.[9]