The Zuiderzee in the Netherlands was partly changed into land by building polders and draining them. Old land is mostly green, new one is darker in color.

Drainage is the natural or artificial removal of surface and sub-surface water from a given area. Many agricultural soils need drainage to improve production or to manage water supplies.

The earliest archaeological record of an advanced system of drainage comes from the Indus Valley Civilization from around 3100 BC in what is now Pakistan and North India. The ancient Indus systems of sewerage and drainage that were developed and used in cities throughout the civilization were far more advanced than any found in contemporary urban sites in the Middle East and even more efficient than those in some areas of modern Pakistan and India today. All houses in the major cities of Harappa and Mohenjo-daro had access to water and drainage facilities. Waste water was directed to covered drains, which lined the major streets. 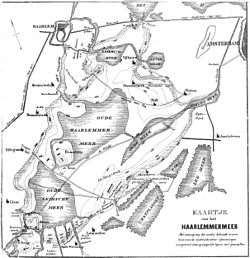 Historic map of the Haarlemmermeer prior to reclamation.

Wetland soils may need drainage to be used for agriculture. In the northern USA and Europe, glaciation created numerous small lakes which gradually filled with humus to make marshes. Some of these were drained using open ditches and trenches.

The largest project of this type in the world has been in process for centuries in the Netherlands. The area between Amsterdam, Haarlem and Leiden was, in prehistoric times swampland and small lakes. Turf cutting (Peat mining), subsidence and shoreline erosion gradually caused the formation of one large lake, the Haarlemmermeer, or lake of Haarlem. The invention of wind powered pumping engines in the 15th century permitted drainage of some of the marginal land, but the final drainage of the lake had to await the design of large, steam powered pumps and agreements between regional authorities. The elimination of the lake occurred between 1849 and 1852, creating thousands of km2 of new land.