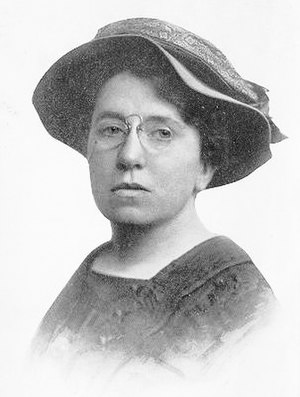 Emma Goldman (June 27, 1869 – May 14, 1940) was one of the most well-known anarchists from late 19th century to early 20th century. She was an anarcho-communist who was an early supporter of atheism, gay rights and feminism.

Goldman was born in modern-day Lithuania (at the time it was part of the Russian Empire). She moved to Rochester, New York with her sister when she was 17.

At first she worked in a textile factory and married her co-worker Jacob Kersner. Their relationship began to blossom after Kersner found out about her prostitution business. Their marriage was short and Goldman moved to New York City and became a member of the anarchist community. She became good friends with Alexander Berkman (another anarchist) and helped him plan the attempted-assassination of Henry Clay Frick, a rich man who treated his workers badly. Berkman was unsuccessful and spent fourteen years in prison, but Goldman was not punished.

Goldman did face many legal troubles though. In 1893 she was convicted of starting a riot and spent a year in prison. She was arrested in 1901 for allegedly conspiring in the assassination of President McKinley, but was never found guilty. In 1916 she spent time in prison for giving out information on birth control (which was a crime at the time). In 1917 she was arrested and spent two years in prison for not supporting World War I.

In 1919, Goldman and Berkman were deported (sent back) to Russia because the American government thought they were too dangerous. The Russian Revolution had just happened and Goldman was hopeful that Russia might end up being a good place. She ended up deciding that the revolution in Russia was not as good as she thought and that the Bolsheviks tricked many of the people in Russia. She thought the Bolsheviks were too controlling and were too powerful. She also did not like that the Soviet Union put lots of anarchists in jail for not agreeing with them.

She and Berkman left after two years and Goldman lived in many places in Europe, including England and France. In 1936 she moved to Spain to help the anarchists fight the fascists during the Spanish Civil War.

She died in Toronto of a stroke. She is buried near Chicago.