Lua error in Module:Unicode_data at line 290: attempt to index local 'data_module' (a boolean value)., also known as Emperor Tenchi, was the 38th Emperor of Japan,[1] according to the traditional order of succession.[2] His reign started in 661 and ended in 671.[3]

Before he became the monarch, his personal name (imina) was Lua error in Module:Unicode_data at line 290: attempt to index local 'data_module' (a boolean value)..[4]

He was the son of Emperor Jomei.

Prince Naka no Ōe was made heir apparent and Crown Prince in 661.

Prince Ōtomo (Ōtomo-shinnō) was the favorite son of Emperor Tenji; and he was also the first to be accorded the title of Daijō-daijin.[10] 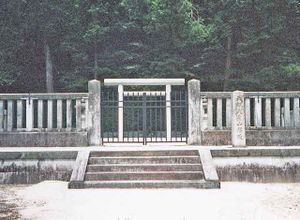 Tenji improved the military forces which had been established during the Taika reforms.[11]

The actual site of Tenji's grave is known.[1] This emperor is traditionally venerated at a memorial Shinto shrine (misasagi) at Yamashina-ku, Kyoto.

The Imperial Household Agency designates this location as Tenji's mausoleum. It is formally named Yamashina no misasagi.[12]

The chrysanthemum symbol of the Japanese emperor and his family