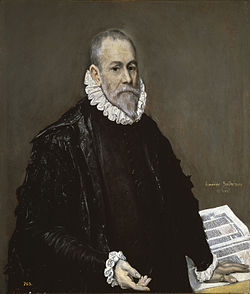 Gómez Pereira (1500 – 1567) was a Spanish philosopher, doctor, and humanist from Medina del Campo. He was most famous for his work in medicine, but he did many different things such as business, engineering, and especially philosophy. As a doctor, he was in favor of using the empirical method, instead of more medieval ideas about medicine.

His ideas in philosophy may have helped René Descartes come up with the famous idea "cogito ergo sum". This is Latin for: "I think, therefore I am".

Little is known about his life. He was the second of five brothers; his father, Antonio, had a small store that sold clothes, and his mother, Margarita, died when he was 15, so the children were raised by his aunt, Ana de Avila. Some of his ancestors were Jews from Portugal who had become Christians.

He studied philosophy at the University of Salamanca. His professor, Juan Martinez, was later the archbishop of Toledo, Spain. He also studied medicine and graduated in 1520. He then settled down as a doctor in his home town, Medina, living with his wife, Isabel Rodriguez, and becoming quite successful in business, even having his own warehouses of wine, and renting rooms to other merchants. He never had children.

He became famous as a doctor, being well known in other cities of Spain. He even went to the court of Philip II of Spain and saved the life of the prince, Don Carlos, when he had an accident. He was also famous as an inventor, and in 1563, he and another inventor named Francisco Lobato got a patent for a type of flour mill powered by water.