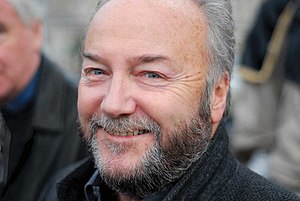 George Galloway (born 16 August 1954) is a British politician. He is a former member of the Labour Party, but left in October 2003; later he was in the Respect Party, until this group was wound up in 2016.

Galloway was born and raised in Dundee, Scotland. He joined the Labour Party Young Socialists when he was 13 years old.

Galloway was a housemate in the 2006 series of Celebrity Big Brother.

Galloway stood in the 2016 London Mayoral election, but came seventh in the vote.