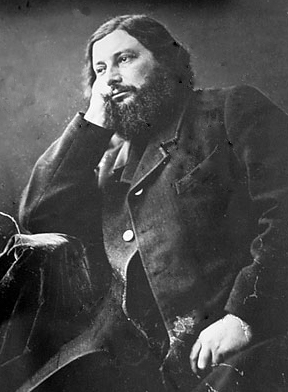 Jean Désiré Gustave Courbet (10 June 1819–31 December 1877) was a French painter. He was the leader of the Realist movement in 19th-century French painting. Courbet is very important in French painting for two reasons. Firstly, he was prepared to try out new ideas and ways of painting. Secondly, his paintings made social comment on the world around him. In other words, he was not afraid to show "real life" in a way that was not always beautiful and nice.

Courbet was born in 1819, and was the son of Régis and Sylvie Oudot Courbet in Ornans, Doubs. Courbet's sisters, Zoé, Zélie and Juliette, were his first models for drawing and painting.

When Courbet was twenty he went to Paris in 1839, and worked at the studio of two other painters, Steuben and Hesse. He was not happy there, and wanted to work on his own. He studied the works of many great masters, including Goya, Velazquez and Titian. He painted several self-portraits at this time. He often returned home to Ornans to hunt, fish and find inspiration in the countryside and country life.[1]

In 1846–1847 Coubet travelled to the Netherlands and Belgium where he studied the paintings of Rembrandt, Franz Hals and Jan Steen who all painted in the 1600s. The paintings by these artists often showed realistic scenes and portraits of everyday life. They showed ordinary people at the table together, dancing, writing, cooking, working at trades and in businesses and in the fields. There were many pictures of soldiers. Courbet decided that he wanted to paint scenes of ordinary life the way that these artists did. He did not want to paint scenes from literature, history or mythology like most other artists in France at that time.[2]83

Courbet painted a large picture of everday-life at Ornans. The painting, called After Dinner at Ornans, shows four men who have just finished a meal at a little table, which is perhaps in an inn. One man is playing his violin, one man is lighting his pipe. Courbet sits listening, with his head leaning on his hand. A large dog is curled under a chair. Courbet showed the painting at the Salon Exhibition in Paris. It was a great success. It won a Gold Medal and was bought by the French Government.[3]32 Because of the gold medal, Courbet could hang his pictures at the Salon Exhibitions without having them checked by a jury first. This rule was changed in 1857.[3]55 Courbet's work, and the work of Honoré Daumier and Jean-François Millet, became known as Realism. Like the Dutch painters he admired, Courbet often painted in broad, rough brush strokes. He often used dark earthy colours, particularly brown, in his paintings.

In 1849 Courbet saw two people working by the roadside, using small hammers to break large rocks into gravel. One was an old man and the other was a young boy. Courbet painted a picture of this scene. He explained it to a friend "It is not often that one meets with so complete an expression of poverty and so, right then and there I got the idea for a painting. I told them to come to my studio the next morning."

The picture soon became one of the most famous scenes of the life of poor people that has ever been painted. It was destroyed during World War II in Dresden.[3]31

A Burial at Ornans

Courbet's other important painting that was shown at the Salon of 1850 was a scene of life at his village. Beginning in 1849, he painted the funeral of his great-uncle who had died the previous year. Courbet got all the village people who had been at the funeral to come to his studio and pose for him, one by one, until the painting was complete. The painting was very large, 10 by 22 feet (3.1 by 6.6 meters). The famous artist Jacques Louis David had once painted a very large picture in the same way. David's picture was of the Coronation of Napoleon and showed all the people who were present.

Some people praised The Funeral at Ornans but other people were very angry about it. They thought that it was wrong to show the burial of an ordinary man in a huge painting, as if he was as important as an emperor. They thought that it was wrong to show the poor people of a village, with their old clothes and dirty boots, as if they were all as important as lords and ladies.[2]4 Some of the critics said that Courbet was deliberately trying to paint ugliness.[2] Many people came to see the picture and liked the new Realist way of painting. Courbet said: "The Burial at Ornans was .... the burial of Romanticism."

Courbet became a celebrity. (He became famous and written about in the newspapers- like a film star.) People said he was a genius, a "terrible socialist", and a "savage".[2]8 Courbet wrote to a friend in 1850: 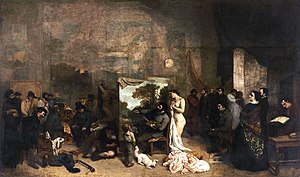 Courbet then painted another huge picture. This painting is called The Artist's Studio and is about seven years in his life as a painter. He shows himself at the centre of the picture, working on a large landscape painting. Behind him is an artists' model, who is naked. All around Courbet are his friends and people from his village. His mother stands to one side of the picture. Another woman is sitting on the floor feeding her baby. A little boy watches the artist, while a white cat plays on the floor.

In 1855 Coubet took this picture, with Burial at Ornan and twelve other paintings to be shown in a big international exhibition in Paris called Exposition Universelle. The two biggest paintings and another one were sent away because there was not enough room. Courbet was angry. He had his own building put up, and showed forty of his paintings.[3]52 Many other artists praised Courbet, but some people laughed at him, and the public did not buy very many of his pictures.[2]84 Because of what he had done, younger artists heard about him and admired him. These included James McNeill Whistler in the United States as well as Édouard Manet in France.

In 1857 Courbet showed six pictures in the Salon exhibition. One was a hunting scene and one was a picture of two prostitutes lying under a tree on the banks of the River Seine in Paris. Many people came to the exhibition. The hunting scenes were very popular for decorating the halls and dining rooms of large houses.[3]52

At this time, there were many political problems in France. Courbet became involved in the political problems. In 1871, he was blamed because a public monument called the Vendôme Column had been demolished. He was put in prison for six months. In 1873, the new government expected him to pay to have the monument restored and put back. He did not have enough money so left France to live in Switzerland.[6] The government decided to make terms so that Courbet could pay for the column in yearly payments of 10,000 francs for 33 years. Courbet died at La Tour-de-Peilz, Switzerland, on 31 December 1877, one day before the first payment was due. He was 58 and died of liver disease, made worse by heavy drinking.[7]