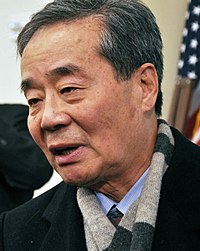 Harry Wu (February 8, 1937 – April 26, 2016; Chinese: 吴弘达) was a Chinese-born American human rights activist. Wu spent 19 years in Chinese labor camps. He was born in Shanghai. He was a resident and citizen of the United States. In 1992, he founded the Laogai Research Foundation.

Among Wu's supporters was the AFL-CIO. In 1990, Senators Alan Cranston (D-Calif.), and Jesse Helms (R-N.C.) invited Wu to testify before the Senate on the laogai. In November 2008, Wu opened the Laogai Museum in Washington, D.C.. He called it the first ever United States museum to talk about human rights in China.

Help Improve This Page: Please contact us to become an approved KidzSearch editor and provide your credentials. Provide feedback on this article in our Harry Wu Forum