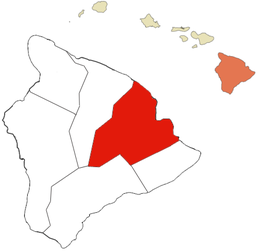 Hilo (pronounced /ˈhiːloʊ/) is the second-largest CDP in the State of Hawaiʻi and the largest settlement on the island of Hawaiʻi with a population of 40,759 during the 2000 census.

Hilo is the county seat of Hawaiʻi County, Hawaiʻi,[1] and is in the South Hilo District. The town overlooks Hilo Bay.

Hilo is near two shield volcanoes

Some of the best ground-based astronomical observatories are on Mauna Kea.

Hilo is home to the University of Hawaiʻi at Hilo, as well as the Merrie Monarch Festival, a week-long celebration of ancient and modern hula, which takes place every year after Easter. It is also home to the Mauna Loa Macadamia Nut Corporation, one of the world's leading producers of macadamia nuts. It is served by Hilo International Airport, inside the CDP.[2]

Although there is not much archaeological evidence, people lived in the areas along Hilo Bay, Wailuku and Wailoa Rivers before the Western world made contact. They were known as the Hilo. They dominated the high mountaintops until the middle 1800s. Hilo means high mountaintop in the original language of the native peoples who lived on the mountaintops. King Kamehameha, the first king of Hawaii, conquered all the islands and then moved the Hilo mountain settlement to the shore after the arrival of outsiders.

Originally, the name Hilo applied to the whole district of Hilo, now divided into South Hilo District and North Hilo District. When William Ellis visited in 1823, the main settlement in Hilo district was Waiākea on Hilo Bay.[3] Missionaries came to the district in the early to middle 1800s, founding several churches, notably Haili Church, in the area of modern Hilo.

Hilo expanded as sugar plantations in the surrounding area created new jobs and drew in many workers from Asia, making the city a trading center.

A breakwater across Hilo Bay was begun in the 1900s and completed in 1929. On April 1, 1946, a 7.8 magnitude earthquake near the Aleutian Islands created a fourteen-meter high tsunami that hit Hilo 4.9 hours later, killing 160 people. In response an early warning system, the Pacific Tsunami Warning Center, was established in 1949 to track these killer waves and provide warning. This tsunami also meant the end of the Hawaii Consolidated Railway, and instead the Hawaii Belt Road was built north of Hilo using some of the railbed.[4]

On May 23, 1960, another tsunami, caused by a 9.5 magnitude earthquake off the coast of Chile the previous day, claimed 61 lives allegedly due to people's failure to heed warning sirens. Low-lying bayfront areas of the city on Waiākea peninsula and along Hilo Bay, previously populated, were rededicated as parks and memorials.

Aftermath of the 1960 Chilean tsunami in Hilo, Hawaiʻi, where the tsunami left 61 people dead and 282 seriously injured 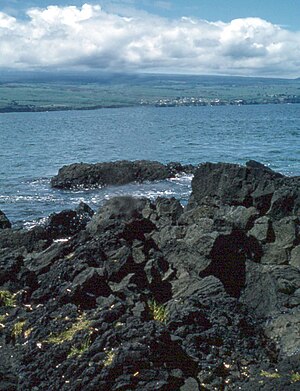 Hilo features a tropical rainforest climate (Koppen Af), with substantial rainfall throughout the course of the year. Hilo's location on the eastern side of the island of Hawaiʻi (windward relative to the trade winds) makes it the wettest city in the United States and one of the wettest cities in the world. An average of around 126 inches (3,200 mm) of rain fell at Hilo International Airport annually between 1971–2000, with 275 days of the year receiving some rain.[6] At some other weather stations in Hilo the annual rainfall is above 200 inches (5,100 mm).[7]

Hilo's location on the shore of the funnel-shaped Hilo Bay also makes it vulnerable to tsunamis.[10]

There are many educational institutions in Hilo. Some of these are the University of Hawaiʻi at Hilo and Hawaiʻi Community College.

Naha Stone at the public library