Hugo Lloris (born 26 December 1986) is a French professional footballer. He plays as a goalkeeper for Tottenham Hotspur and for the France national football team. 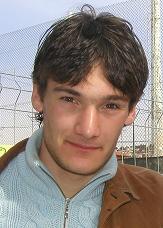 Hugo began his football career when he was six years old and played at the CEDAC (Centre de Diffusion et d'Action Culturelle), a local cultural centre based in the neighborhood of Cimiez, Nice. The centre offered a variety of activities, which included football. Lloris played at a variety of positions at the centre, such as in the attack, before switching to the goalkeeper position after coaches noticed that he possessed (to have) impressive goalkeeping qualities, such as ball-handling and catching skills.

Hugo Lloris began his professional career in 1997 with the Nice's youth team, at the age of 11. He arrived to OGC Nice, thanks to the Nice's former goalkeeper Dominique Baratelli, and in 2004, he was France's U18 champion.

In the 2005-06 season, at the age of 19, he played with the first team of Nice. His first match with the team came on 25 October 2005 against Chateauroux.[4] He played in five matches during that season.

The next season, he played 37 matches. He gave up only 36 goals and recorded 13 clean sheets.

After that season, several big European clubs approached Lloris. They hoped to sign him to their teams because of his excellent performance.

Lloris made his club debut on 10 August 2008 against Toulouse. He finished the campaign conceding only 27 goals in the league and recording 16 clean sheets; both of which were second-best to only Cédric Carrasso. Lloris was then named the league's top goalkeeper and also named to the Team of the Year.

In the 2009–10 season, Lloris remained the club's first-choice goalkeeper and opened the new campaign by recording four clean sheets in the club's first eight matches. In September 2009, he was awarded the UNFP Player of the Month. In December 2009, Lloris finished third behind Nicolas Anelka and Yoann Gourcuff in voting for the France Football 2009 French Player of the Year award. On 16 February 2010, Lloris earned a clean sheet in Lyon's first leg of its UEFA Champions League knockout round match against Real Madrid. In May 2010 he was named, for the second consecutive season, the UNFP Ligue 1 Goalkeeper of the Year.

In the 2010-2011 season, Lloris was nominated for the UEFA Club Goalkeeper of the Year award at the UEFA Club Football Awards, but lost out on the award to Champions League-winning keeper Júlio César of Internazionale.[7][8] In this season, he conceded 40 goals. 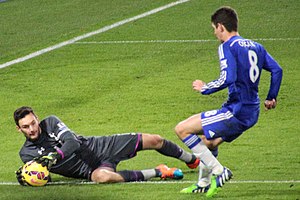 Lloris making a save for Tottenham in 2014

Lloris signed for Tottenham Hotspur on 31 August 2012 for €10 million and €5 million variable.[9][10] He made his debut for Spurs in a UEFA Europa League match against Lazio on 20 September 2012, the result of the match was 0–0.[11] Lloris started his first Premier League game against Aston Villa on 7 October 2012, keeping a clean sheet in a 2–0 home victory. After conceding only four goals in six games, he was nominated for the Barclays Premier League Player of the Month for December 2012, but lost out to Manchester United's Robin van Persie.[12] Lloris ended the 2012–13 season with 25 appearances and 9 clean sheets.

Lloris signed a five-year contract extension in July 2014.[13] Lloris was named in the starting eleven of the EFL Cup final against Chelsea F.C. in the hopes of winning the trophy but Tottenham lost 2–1.[14]

In December 2016, Lloris signed a contract extension to remain at Tottenham until 2022.[16] In the 2016–17 season, Lloris helped Tottenham achieve the best defensive record in the club's history, conceding only 26 goals in the Premier League this season (only 9 of which were conceded in home league games).[source?]

Lloris has been active on the international front with France, first appearing with the under-18 team making his debut on 11 March 2004 in a friendly match against Germany.[17] He later played with the under-19 team and was part of the winning team at the 2005 European Under-19 Football Championship. Lloris appeared in all five matches the team played in the competition. He made only five appearances with the under-21 team.

Lloris received his first call-up to the senior national team on 6 February 2008 in a match against Spain.

On 17 November 2010, Lloris captained France, for the first time, in the team's 2–1 victory over England at Wembley Stadium.[18]

On 2 June 2017, Lloris made his 88th appearance for France in a 5–0 friendly home win over Paraguay, overtaking Fabien Barthez as his nation's most capped goalkeeper of all time.[22][23]

On 21 June 2018, Lloris earned his 100th cap in France's 1–0 win over Peru in their second group stage game of the 2018 FIFA World Cup.[24] Against Uruguay in the quarter-finals, Lloris made a key save from a Martin Caceres header as France won 2-0.

On 15 July, he lifted the World Cup trophy as his team's captain, as France defeated Croatia with a 4–2 victory in the final, despite his mistake which allowed Croatia's Mario Mandžukić to score a goal as Lloris tried to dribble past him.[25] Gianluigi Buffon praised him and said in an interview that Hugo deserved to win the Golden Glove award of the best goalkeeper of the tournament, which was won by Thibaut Courtois.[26]