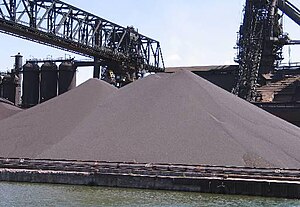 Iron ores are rocks and minerals from which metallic iron can be economically extracted.[1]

Iron (Fe) is one of the most abundant rock-forming elements. It makes up about 5% of the Earth's crust. It is the second most abundant and widely distributed metal (Aluminium is the most common). People have used it for more than 3,000 years. However, its use only became widespread in the 14th century, when smelting furnaces (the forerunner of blast furnaces) began to replace forges.

The ores are usually rich in iron oxides and vary in colour from dark grey, bright yellow, deep purple, to rusty red.