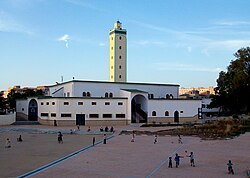 Islam in Morocco is the largest religion making up about 99% of the population. The remaining 1% are Christian and Jewish.[1]

Islam was first brought to Morocco in 680 by an Arab invasion under Oqba ben Nafi. He rode his horse into the Atlantic Ocean saying that was all that prevented him from more conquests.[2] He called Morocco Maghreb al-Aksa (meaning the farthest west).[2] In 788, The Zaydi Shia Idrisids ruled large parts of Morocco. Later, several Berbers formed more powerful Islamic dynasties that reigned over the country. Among them were the Almoravids, who were the first to unite Morocco. They also united significant regions in West Africa, Spain and Algeria. These Almoravids were responsible for making the Maliki school the most prominent in Morocco.

Today Morocco is mostly Sunni. Of the four Sunni schools of thought Muslims in Morocco are mainly of the Maliki school.[3]