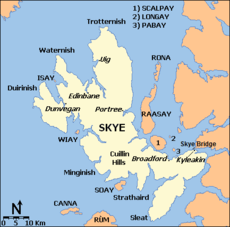 Skye and the surrounding islands

The Inner and Outer Hebrides to the west of the mainland of Scotland. 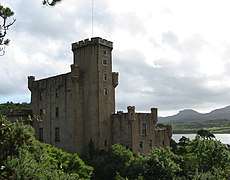 Skye is the largest and most northerly island in the Inner Hebrides of Scotland.[1] More than 9000 people live there, and half of the people speak Gaelic. The main settlement is Portree, known for its picturesque harbour.

The island has been occupied since the mesolithic period and has a colourful history. It was rule by the Norse for 400 years, then dominated by Clan MacLeod and Clan Donald. The Highland Clearances of the 19th century caused a decline in the population from over 20,000 to around 9,200 in the early 21st century. The population has risen 4% from the census of 1991.[2] The main industries are tourism, agriculture, fishing and whisky-distilling.

Skye is part of the Highland Council local government area and is now linked to the mainland by a road bridge.[3] The island is renowned for its spectacular scenery, vibrant culture and heritage, and its abundant wildlife, including the Golden Eagle, Red Deer and Atlantic Salmon.

Skye has a rich heritage of ancient monuments from the clans, especially castles. Dunvegan Castle has been the seat of Clan MacLeod since the 13th century. It may have been inhabited by a single family for longer than any other house in Scotland.[4]

The 18th century Armadale Castle, once home of Clan Donald was abandoned as a residence in 1925 but now hosts the Clan Donald Centre.[5] Nearby are the ruins of two more MacDonald strongholds, Knock Castle, and Dunscaith Castle, the legendary home of Queen Scáthach.[6][7]

At 1,656 square kilometres (639 sq mi), Skye is the second-largest island in Scotland after Lewis and Harris. 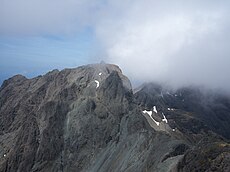 The Sgùrr Dearg and its Inaccessible Pinnacle

A climber on the west ridge of the Inaccessible Pinnacle, taken from near the lower top of Sgùrr Dearg

The Black Cuillin, low mountains mainly composed of basalt and gabbro, include 12 peaks the Scots call 'Munros'. This is some of the most dramatic and challenging mountain terrain in Scotland. The ascent of Sgùrr a' Ghreadaidh is one of the longest rock climbs in Britain and the Inaccessible Pinnacle is the only peak in Scotland that requires technical climbing skills to reach the summit.[6][8] A full crossing of the Cuillin ridge may take 15–20 hours to complete.[9]