Aurelian Jake Smith, Jr. (born May 30, 1955) is a American semi-retired professional wrestler. He is best known for wrestling with WWF, WCW and ECW under the ring name, Jake "The Snake" Roberts. He is a second generation wrestler because his father is Aurelian "Grizzly" Smith. He was known for bringing out snakes during his matches, one of his snakes being a python named Damien.

During his life, he suffered from alcohol and drug addiction. He moved in with former professional wrestler Diamond Dallas Page to help get his life back on track.[3]

In February 2014, it was reported by TMZ that Roberts had been suffering from muscular cancer below his knee, and was scheduled to go into surgery for it on the 25th. Responding to the article, Roberts was quoted as saying "If the devil can't defeat me, cancer doesn't stand a chance in hell! Pray for sick children who face this horrible disease 'cause The Snake will be just fine."[4] In July 2014, Roberts announced that he was cancer-free, as various operations had been successful.[5]

On August 28 2014, he got sick during a flight from Atlanta to Las Vegas where he was supposed to attend a birthday event for wrestler Nick Cvjetkovich. It was first reported that Roberts had become unconscious but it was later confirmed that he was both alert and awake during the flight and had notified the flight attendant of pain and shortness of breath.[6] It was stated that he was in a 'coma-like' state in order to treat pneumonia. After he was taken to the ICU in Las Vegas, he was diagnosed with pneumonia, which was something his own doctors missed.[7] It was also confirmed that doctors had found an abnormality on his brain which they feel could be a result of all the bumps Robert's took over his career.[8]

On September 6, 2014, Robert was released from the hospital and attended the Future Stars of Wrestling's "Survival of the Fittest" event the same day. At the event, he announced that doctors had found more cancer, this time in his chest.[9] 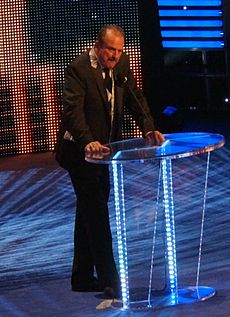 Roberts giving his speech at the WWE Hall of Fame