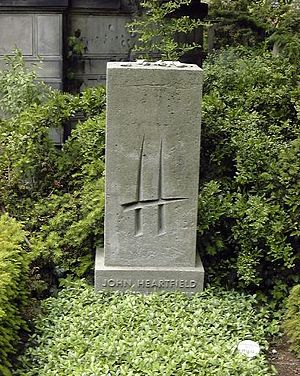 Grave of John Heartfield in Berlin

John Heartfield (June 19, 1891 in Berlin – April 26, 1968 in Berlin) is the English version of the name of the German photomontage artist Helmut Herzfeld. He started to call himself Heartfield in 1916, to criticize the rabid nationalism and anti-British sentiment in Germany during World War I.

In 1918, Heartfield began at the Berlin Dada scene, and the Communist Party of Germany. He was thrown out of the Reichswehr film service because he supported the strike after the assassination of Karl Liebknecht and Rosa Luxemburg. With George Grosz, he founded Die Pleite, a satirical magazine. Heartfield started to work for two communist publications: the daily Die Rote Fahne (The Red Flag)and the weekly Arbeiter-Illustrierte-Zeitung (AIZ)(Workers' Illustrated Newspaper). AIZ published Heartfield's most famous work[1]

In 1933, after the National Socialists came to power in Germany, Heartfield moved to Czechoslovakia, where he continued his photomontage work for the AIZ (which was published in exile); in 1938, the Nazis were preparing to invade Czechoslovakia, so he moved to England, and lived in Hampstead, London. After World War II he settled in East Germany, after 1954 he lived in East Berlin and worked closely with theatre directors such as Benno Besson and Wolfgang Langhoff at Berliner Ensemble and Deutsches Theater.

In 2005, Tate Britain held an exhibition of his photomontage pieces.

His photomontages satirising Adolf Hitler and the Nazis often used Nazi symbols such as the swastika to change their propaganda message.

One of his more famous pieces, made in 1935 entitled Hurrah, die Butter ist Alle! (English: Hurray, The Butter is All Gone!) was published on the frontpage of the AIZ in 1935. The photomontage shows a family at a kitchen table, where a nearby portrait of Hitler hangs and the wallpaper is covered with swastikas. The family — mother, father, old woman, young man, baby, and dog — are trying to eat pieces of metal, such as chains, bicycle handlebars, and rifles. Below, the title is written in large letters, in addition to a quote by Hermann Goering during food shortage. Translated, the quote reads: "Iron has always made a nation strong, butter and lard have only made the people fat". The picture makes fun of a speech Goering made, the quote is shortened to "Guns before butter"

Hurrah, die Butter ist Alle! served as the inspiration behind the song "Metal Postcard (Mittageisen)" by Siouxsie & the Banshees; the song was re-recorded in German and released as a single with Heartfield's work as the cover art.

The Heartfield piece The Hand has 5 Fingers[2] with its original text: "5 fingers make a hand! With these 5 grab the enemy!", was referenced by alternative metal band System of a Down. A text printed on the back of the album System of a Down reads: "The hand has five fingers, capable and powerful, with the ability to destroy as well as create".