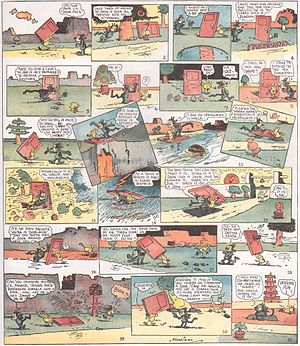 Krazy Kat is a comic strip created by cartoonist George Herriman. It was published daily in newspapers between 1913 and 1944. It first appeared in the New York Evening Journal. Its owner, William Randolph Hearst, was a major booster for the strip throughout its run.

The Krazy Kat characters were introduced in another Herriman strip The Dingbat Family.[1] The phrase "Krazy Kat" originated there. It was the mouse's way of describing the cat. The strip is set in Herriman's vacation home of Coconino County, Arizona. Krazy Kat is mixture of offbeat surrealism, innocent playfulness, and poetic, idiosyncratic language.

The strip focuses on the curious love triangle between Krazy Kat, a carefree, simple-minded cat; Ignatz Mouse; and police dog, Offissa Bull Pupp. Krazy has an unrequited love for the mouse. Ignatz despises Krazy. He throws bricks at Krazy's head. Krazy thinks this is a sign of the Mouse's affection. Krazy utters grateful replies such as "Li'l dollink, allus f'etful". Offissa Pupp is Coconino County's administrator of law and order. He makes it his mission to interfere with Ignatz's brick-tossing plans. He locks the mouse in the county jail.

The detailed characterization and Herriman's visual and verbal creativity made Krazy Kat one of the first comics to be praised by intellectuals. The strip was treated as "serious" art. Critic Gilbert Seldes wrote at length about the strip in 1924, calling it "the most amusing and fantastic and satisfactory work of art produced in America today."[2] Poet E. E. Cummings admired Herriman and wrote the introduction to the first collection of the strip in book form. Krazy Kat was only a modest success during its initial run. In more recent years, many modern cartoonists have cited Krazy Kat as a major influence on their own work.