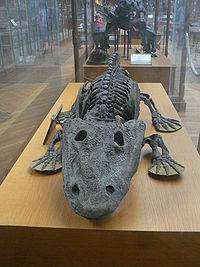 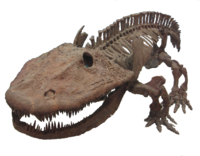 Labyrinthodont is a term which was used for fossil amphibia. Although it is no longer a formal term in taxonomy, it is still useful as an evolutionary grade, a kind of catch-all term. Labyrinth mean a maze and dont means tooth.

Labyrinthodonts are often called Temnospondyls.[1] The Labyrinthodontia is not a clade, because it is not monophyletic. It has been replaced in the classification by more correct terms.

The labyrithodonts were some of the dominant animals from the Devonian to the Lower Triassic (about 390 to 210 million years ago). The group is an evolutionary grade (a polyphyletic or paraphyletic group) of species which look rather similar.

The name describes the pattern of infolding of the dentine and enamel of the teeth, which often fossilise. They are also have a heavily armoured skull roof (so they also have an even older name "Stegocephalia"), and complex vertebrae. 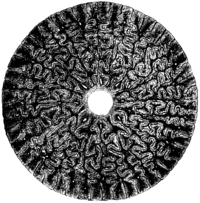 Cross-section of a labyrinthodont tooth

The labyrinthodonts flourished for more than 200 million years. Although there was much variation, these traits make their fossils distinct and easy to recognise:

What the term included 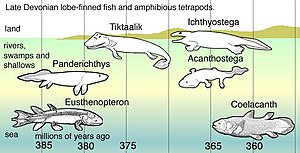 In Late Devonian vertebrate speciation, descendants of pelagic lobe-finned fish – like Eusthenopteron – had a series of adaptations:
• Panderichthys, suited to muddy shallows;
• Tiktaalik with limb-like fins that could take it onto land;
• Early tetrapods in weed-filled swamps, such as:
• Acanthostega which had feet with eight digits,
• Ichthyostega with limbs.
Descendants also included pelagic lobe-finned fish such as coelacanth species.


Early tetropods are now classified as lobe-finned fish (Sarcopterygii). This is because we now know they were aquatic when the limbs first evolved (see Tetrapod).

The informal term fishapods is often used for this group of Devonian animals.

A more formal term, used by Clack, is "stem-group tetrapods".[3]