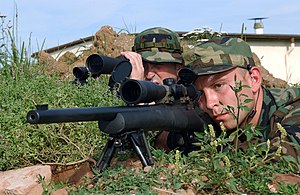 Long range shooting is a relative term generally meaning accurate shooting at distances ordinary shooters with ordinary rifles could not hit. For example, Daniel Boone, using a flintlock rifle could probably hit a target at up to 100 yards (91 m). Today, expert marksmen are hitting targets well over 1 mile (1.6 km) away. Modern long range shooting is more than just using modern machined actions and precision gun barrels.[1] These produce a rifle that a decent shooter can hit targets at about 250 yards, ranges that were unheard of by black powder shooters.

Long range shooters, and especially snipers, operate as a team.[4] As difficult as long range shooting is, it would be even harder without a spotter. Spotters are also trained snipers or long range shooters.[4] The spotter has a number of jobs. He helps locate the target. He does most of the calculations for elevation, windage, and hitting a moving target.[4] With several targets, the spotter decides which to hit first. Spotters also measure the humidity, temperature, and the angle of the shot.[4] He then tells the sniper/shooter what adjustments to make to the rifle scope.[4] Finally, the spotter tells the shooter where the round hit—on target or a miss—and what adjustments to make to get back on-target.[4]