When his father died in early 138, Hadrian chose Antoninus Pius (86–161) as his successor. Antoninus was adopted by Hadrian on the condition that Verus and Hadrian’s great-nephew Marcus Aurelius was to be adopted by Antoninus as his sons and heirs.

Verus started his political career as a quaestor in 153, became consul in 154, and in 161 was consul again with Marcus Aurelius as his senior partner.

Accession of Lucius and Marcus, 161

Antoninus died on 7 March 161, and was succeeded by Marcus Aurelius.[2]p156 Although the senate planned to confirm Marcus alone, he refused to take office unless Lucius received equal powers.[1]p116 The senate accepted, granting Lucius the imperium, the tribunician power, and the name Augustus. It was the first time that Rome was ruled by two emperors.[1]p117[notes 1]

In spite of their nominal equality, Marcus held more authority than Verus. He had been consul once more than Lucius, he had shared in Pius' administration, and he alone was Pontifex Maximus. It would have been clear to the public which emperor was the more senior. As the biographer wrote, "Verus obeyed Marcus...as a lieutenant obeys a proconsul or a governor obeys the emperor".[1]p117

Immediately after their senate confirmation, the emperors went to the camp of the praetorian guard. Lucius addressed the assembled troops, which then acclaimed the pair as imperatores. Then, like every new emperor since Claudius, Lucius promised the troops a special donative.[1]p117 The ceremony was perhaps not entirely necessary, given that Marcus' accession had been peaceful and unopposed, but it was good insurance against later military troubles.

War with Parthia had started as soon as Antoninus died.

Over the winter of 161–62, as more bad news arrived—a rebellion was brewing in Syria—it was decided that Lucius should direct the Parthian war in person. He was stronger and healthier than Marcus, the argument went, more suited to military activity.[1]p123 Whatever the case, the senate gave its assent, and Lucius left. Marcus would remain in Rome; the city "demanded the presence of an emperor".

Furius Victorinus, one of the two praetorian prefects, was sent with Lucius, as were a pair of senators, and part of the praetorian guard.[1]p125 Victorinus had previously served as procurator of Galatia, giving him some experience with eastern affairs. Since a prefect had to accompany the guard, Victorinus was the clear choice.[2]p161

Laelianus, one of the Senators, was "a serious man and an old-fashioned disciplinarian". Bassus, the other Senator, had been governor of Lower Moesia, and was also made comes.[1]p125

Lucius left in the summer of 162 to take a ship from Brundisium; Marcus followed him as far as Capua. Lucius feasted himself in the country houses along his route, and hunted at Apulia. He fell ill at Canosa, probably afflicted with a mild stroke, and took to bed. Marcus made prayers to the gods for his safety in front of the senate, and hurried south to see him.[1]p125

Verus continued eastward via Corinth and Athens, accompanied by musicians and singers as if in a royal progress. It is not known how long Verus' journey east took; he might not have arrived in Antioch until after 162. Statius Priscus, meanwhile, must have already arrived in Cappadocia; he would earn fame in 163 for successful generalship.[1]p126 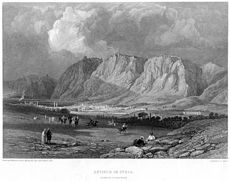 Antioch from the southwest (engraving by William Miller after a drawing by H. Warren from a sketch by Captain Byam Martin, R.N., 1866)

Lucius spent most of the campaign in Antioch, though he wintered at Laodicea and summered at Daphne, a resort just outside Antioch. He took up a mistress named Panthea, from Smyrna. The biographer calls her a "low-born girl-friend",[1]p129 but she is probably closer to an account of Lucian: "a woman of perfect beauty", more beautiful than any of Phidias and Praxiteles' statues. Polite, caring, humble, she sang to the lyre perfectly and spoke clear Ionic Greek, spiced with Attic wit.[1]p129

Lucius faced quite a task.[2]p162 The Syrian army had turned soft during the east's long peace. They spent more time at the city's open-air cafés than in their quarters. Under Lucius, training was stepped up. Pontius Laelianus ordered that their saddles be stripped of their padding. Gambling and drinking were sternly policed. Fronto wrote that Lucius was on foot at the head of his army as often as on horseback. He personally inspected soldiers in the field and at camp, including the sick bay.[1]p129

In the middle of the war, perhaps in autumn 163 or early 164, Lucius made a trip to Ephesus to be married to Marcus' daughter Lucilla.[2]p163 Lucilla's thirteenth birthday was in March 163; whatever the date of her marriage, she was not yet fifteen. Marcus had moved up the date: perhaps stories of Panthea had disturbed him. Lucilla was accompanied by her mother Faustina and M. Vettulenus Civica Barbarus, the half-brother of Lucius' father. Marcus may have planned to accompany them all the way to Smyrna (the biographer says he told the senate he would); this did not happen. Marcus only accompanied the group as far as Brundisium, where they boarded a ship for the east. Marcus returned to Rome immediately thereafter, and sent out special instructions to his proconsuls not to give the group any official reception. Lucilla would bear three of Lucius' children in the coming years. Lucilla became Lucilla Augusta.[2]p163

Legions I Minervia and V Macedonica, under the legates M. Claudius Fronto and P. Martius Verus, served under Statius Priscus in Armenia, earning success for Roman arms during the campaign season of 163,[2]p163 including the capture of the Armenian capital Artaxata. At the end of the year, Verus took the title Armeniacus, despite having never seen combat; Marcus declined to accept the title until the following year. When Lucius was hailed as imperator again, however, Marcus did not hesitate to take the Imperator II with him. The army of Syria was reinforced by II Adiutrix and Danubian legions under X Gemina's legate Geminius Marcianus.[2]p162 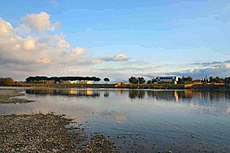 The Euphrates river near Ar-Raqqah, Syria

Occupied Armenia was reconstructed on Roman terms. A new king was installed: a Roman senator of consular rank and Arsacid descent, C. Iulius Sohaemus. He may not even have been crowned in Armenia; the ceremony may have taken place in Antioch, or even Ephesus.[1]p280n Sohaemus was hailed on the imperial coinage of 164 under the legend Rex armeniis Datus: Verus sat on a throne with his staff while Sohamenus stood before him, saluting the emperor.

In 163, while Statius Priscus was occupied in Armenia, the Parthians invaded Osroene, a Roman client state in upper Mesopotamia, just east of Syria, with its capital at Edessa. They deposed the country's leader, Mannus, and replaced him with their own nominee, who would remain in office until 165.[1]p130, 279 In response, Roman forces were moved downstream, to cross the Euphrates at a more southerly point. The Parthians still held the southern, Roman bank of the Euphrates (in Syria) as late as 163. Before the end of the year, however, Roman forces had moved north to occupy Dausara and Nicephorium on the northern, Parthian bank. Soon after the conquest of the north bank of the Euphrates, other Roman forces moved on Osroene from Armenia, taking Anthemusia, a town south-west of Edessa. There was little movement in 164; most of the year was spent on preparations for a renewed assault on Parthian territory.[1]p131

In 165, Roman forces, perhaps led by Martius Verus and the V Macedonica, moved on Mesopotamia. Edessa was re-occupied, Mannus re-installed.[2]p169 His coinage resumed, too: 'Ma'nu the king' (Syriac: M'NW MLK') or Antonine dynasts on the obverse, and 'King Mannos, friend of Romans' (Greek: Basileus Mannos Philorōmaios) on the reverse. The Parthians retreated to Nisibis, but this too was besieged and captured. The Parthian army dispersed in the Tigris; their general Chosrhoes swam down the river and made his hideout in a cave. A second force, under Avidius Cassius and the III Gallica, moved down the Euphrates, and fought a major battle at Dura.[2]p163

By the end of the year, Cassius' army had reached the twin metropolises of Mesopotamia: Seleucia on the right bank of the Tigris and Ctesiphon on the left. Ctesiphon was taken and its royal palace set to flame. The citizens of Seleucia, still largely Greek (the city had been commissioned and settled as a capital of the Seleucid empire, one of Alexander the Great's successor kingdoms), opened its gates to the invaders. The city got sacked nonetheless, leaving a black mark on Lucius' reputation. Excuses were sought, or invented: the official version had it that the Seleucids broke faith first. Whatever the case, the sacking marks a particularly destructive chapter in Seleucia's long decline.[2]p163/4

Cassius' army, although suffering from a shortage of supplies and the effects of a plague contracted in Seleucia, made it back to Roman territory safely. Iunius Maximus, a young tribune serving in III Gallica under Cassius, took the news of the victory to Rome. Maximus received a generous cash bounty for bringing the good news, and immediate promotion to the quaestorship.[2]p164 Lucius took the title Parthicus Maximus, and he and Marcus were hailed as imperatores again, earning the title 'imp. III'.

Cassius' army returned to the field in 166, crossing over the Tigris into Medea. Lucius took the title 'Medicus', and the emperors were again hailed as imperatores, becoming 'imp. IV' in imperial titulature. Marcus took the Parthicus Maximus now, after another tactful delay.[2]p164

Most of the credit for the war's success must be ascribed to subordinate generals. The forces that advanced on Osroene were led by M. Claudius Fronto, an Asian provincial of Greek descent who had led I Minervia in Armenia under Priscus. He was probably the first senator in his family.[1]p130 Fronto was consul for 165, probably in honor of the capture of Edessa. P. Martius Verus had led V Macedonica to the front, and also served under Priscus. Martius Verus was a westerner, whose patria was perhaps Tolosa in Gallia Narbonensis.

The most prominent general, however, was C. Avidius Cassius, commander of III Gallica, one of the Syrian legions. Cassius was young senator of low birth from the north Syrian town of Cyrrhus. His father, Heliodorus, had not been a senator, but was nonetheless a man of some standing: he had been Hadrian's ab epistulis, followed the emperor on his travels, and was prefect of Egypt at the end of Hadrian's reign. Cassius also, with no small sense of self-worth, claimed descent from the Seleucid kings. Cassius and Martius Verus, still probably in their mid-thirties, took the consulships for 166.[2]p164

Vologases IV of Parthia (147–191) made peace but was forced to cede western Mesopotamia to the Romans. Lucius is reported to have been an excellent commander, without fear of delegating military tasks to more competent generals.

On his return to Rome, Lucius was awarded with a triumph. The parade was unusual because it included Lucius, Marcus Aurelius, their sons and unmarried daughters as a big family celebration. Marcus Aurelius' two sons, Commodus five years old and Annius Verus of three, were elevated to the status of Caesar for the occasion.

Wars on the Danube and death

In the spring of 168 war broke out in the Danubian border when the Marcomanni invaded the Roman territory. This war would last until 180, but Verus did not see the end of it. In 168, as Verus and Marcus Aurelius returned to Rome from the field, Verus fell ill with symptoms attributed to food poisoning, dying after a few days (169). However, scholars believe that Verus may have been a victim of smallpox, as he died during a widespread epidemic known as the Antonine Plague. Despite the minor differences between them, Marcus Aurelius grieved the loss of his adoptive brother. He accompanied the body to Rome, where he offered games to honour his memory.