Myxobolus cerebralis is a small Myxozoan parasite that eats the insides of fish like salmon and trout, causing whirling disease.

This is a problem in fish farming and also in natural fish populations. In the last 100 years, it has spread to most of Europe (including Russia), the United States, South Africa, and other countries.[1] In the 1980s, people found out that M. cerebralis needs to live in a worm before it can live in a fish.[1] It infects both the fish and the worm by poking a hole in them and putting part of itself in.

Whirling disease hurts young fish the most, and can hurt bones and nerves. Fish with the disease do not swim very well, and they "whirl" or spin instead of swimming straight. This makes it hard for the fish to get food and get away from danger.[2] Dealing with M. cerebralis costs more money than most other parasites in its group (which are called "myxozoans"). People do not get sick with whirling disease, though; only fish do.[3]

M. cerebralis has become well-established, particularly in North America. It has caused the decline of whole cohorts of fish.[4][5]

M. cerebralis has many stages ranging from single cells to bigger spores. Scientists have not studied all the stages very well yet.[6] 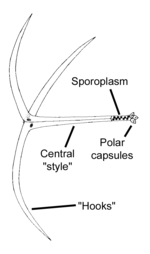 M. cerebralis has many diverse stages ranging from single cells to relatively large spores, not all of which have been studied in detail. The kind of M. cerebralis that can attack fish is called a "Triactinomyxon", and there is a picture of it on the right. There are three "tails" that are each about 200 micrometers long, and another piece that is about 150 micrometers (μm) long. That piece has 64 cells in it.[2] There are also three harpoon-like weapons that can attack the fish.[3] They shoot into the fish, making a hole that the 64 cells can go into. Those cells make more cells that go to the cartilage near the fish's brain.[6]

The kind of M. cerebralis that comes out of fish is called a "Myxospore". They are sort of round and fat in the middle like a lentil or a convex lens. They are about 10 micrometers across and are made of six cells. Two are for the harpoon weapons, two are for protecting the Myxospore, and two are for going into a worm after the weapons make a hole. Myxospores from M. cerebralis look a lot like Myxospores from other species that are sometimes in fish skin, muscle, or brains, and so it's hard to tell them apart.