Last match of Niko Kovac vs. Bayern Munich
He was born in Berlin (Germany) and so he started his career with his local club Hertha Zehlendorf. There he became member of its first team at the age of 17. 1991 he went to Hertha BSC and started his professional career in the Second German League. 1996 he went to Bayer Leverkusen in the German Bundesliga, where he played together with his younger brother Robert. The next clubs were Hamburger SV, Bayern Munich, where he was again teammate of his brother and again Hertha BSC. After the 2006 FIFA World Cup he signed with F.C. Red Bull Salzburg in the Austrian Bundesliga. On 29 May 2009 he resigned from professional football. His last match was a friendly match of Red Bull Salzburg against Bayern Munich. During his career he played 454 matches and scored 56 goals. 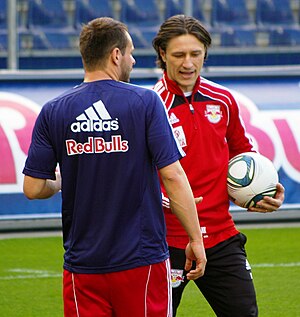