No Mercy 2007 was a professional wrestling event available on pay-per-view made by World Wrestling Entertainment (WWE). It was the ninth yearly No Mercy event and took place on October 7, 2007 at the Allstate Arena in Rosemont, Illinois.[1]

For the first time, there were three new WWE Championship reigns in one night, as Randy Orton was awarded the vacant title (previously held by John Cena) to start the event, only to lose it to Triple H less than a half-hour later, but in turn regain it at the end of the night in a Last Man Standing match.[2]

The other championship matches on the undercard were Batista versus The Great Khali in a Punjabi Prison match for the World Heavyweight Championship,[3] Candice Michelle versus Beth Phoenix for the WWE Women's Championship,[4] and CM Punk versus Big Daddy V for the ECW Championship.[5]

The main feud going into the event for the RAW brand was between WWE Champion John Cena and Randy Orton. The feud began in July after Orton was named the number one contender for Cena's WWE Championship.[6] At SummerSlam, Cena won against Orton, while at Unforgiven, Orton beat Cena by disqualification. Immediately after the match, acting RAW General Manager Jonathan Coachman, believing that Cena got himself disqualified intentionally, made a rematch between the two at No Mercy, this time in a Last Man Standing Match. On September 17, after threatening to strip Cena of his title for his actions at Unforgiven, Coachman ordered Cena's father, Mr. Cena, to face Orton in a match. The match saw Orton hit Mr. Cena with an RKO, while John was forced to watch at ringside while handcuffed to a ring rope.[7] The next week, Coachman said that Orton had been suspended indefinitely for his actions, although he later said that Orton had simply been given the night off.[8] The feud resumed on October 1 when Orton, who earlier appeared "via satellite from Chicago", attacked Cena after his match with Mr. Kennedy, knocking him out with an RKO on the announce table. However, during the match, Cena was legitimately injured, suffering a complete tear of his right pectoral tendon.[9] As a result, the match was canceled, and on the October 2 version of ECW, WWE Chairman Vince McMahon officially stripped Cena of the WWE Championship.[10] No replacement match was ever announced, as McMahon simply stated that "a new WWE Champion will be crowned this Sunday." 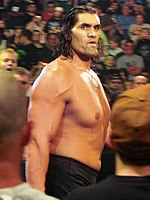 The Great Khali before his World Heavyweight Championship match with Batista.

The main feud for the SmackDown! brand was between Batista, and World Heavyweight Champion The Great Khali. The feud began in July when Khali laid out an open challenge to the SmackDown! roster, which was answered by Batista. Shortly after, the feud began revolving around the World Championship when Khali won a twenty-man battle royal on SmackDown!, winning the vacant title.[11][12] At The Great American Bash, Khali won against Batista and Kane in a triple threat match,[13] while at SummerSlam, Batista beat Khali by disqualification after Khali used a chair.[14] At Unforgiven, Batista won against Khali and Rey Mysterio in a triple threat match to win the championship.[15][16] Khali exercised his rematch clause for a match at No Mercy, to take place in his specialty match, the Punjabi Prison match.

The main feud for the ECW brand was between the ECW Champion, CM Punk, and Big Daddy V. The buildup began when General Manager Armando Estrada announced an "Elimination Chase to No Mercy", involving Elijah Burke, Tommy Dreamer, Kevin Thorn, and Stevie Richards.[17] All four competitors competed in a match together, with the one losing the fall being eliminated from the chase. The rest of the wrestlers then competed again, and the process continued until one superstar was left, with the winner challenging Punk for the title at No Mercy. Over a three-week period, Richards,[17] Thorn,[18] and Burke were eliminated, with Dreamer winning the number one contendership, until Estrada announced that there was one more contender in the chase, Big Daddy V. V quickly won against Dreamer, winning the number one contendership.[19]

Before the event went live on pay-per-view, a dark match between Hardcore Holly and Cody Rhodes took place, which Holly won after executing an Alabama Slam.[20][21]

The event began with WWE Chairman Vince McMahon and Raw General Manager William Regal coming to the ring. McMahon reiterated that former WWE Champion John Cena would be out of action between six months and one year. He then said that the new WWE Champion was Randy Orton. After a brief celebration, Regal gave Orton the choice of facing anyone he wanted that night for the championship. Before he could name an opponent, however, Triple H came out, demanding a championship match for that moment. After suggesting that he “didn't have the guts", McMahon ordered the match to begin. Triple H won the match after a rollup, becoming an eleven-time World Champion. Orton's championship reign lasted less than thirty minutes.[20][21]

The next contest was a bonus six-man tag team match, which saw Jeff Hardy, Paul London and Brian Kendrick take on Mr. Kennedy and the World Tag Team Champions Lance Cade and Trevor Murdoch, which the latter won when Kennedy hit the Green Bay Plunge on London.[20][21]

Backstage, McMahon informed Triple H that his previously scheduled match against Umaga was still going to take place, and that his newly-won WWE Championship would be on the line.[20][21]

Next up was lone ECW match of the evening as Chicago-native CM Punk defended his ECW Championship against Big Daddy V. The meeting was short lived as V's manager, Matt Striker, attacked Punk a couple of minutes into the match, causing a disqualification. Afterward, V attacked Punk, hitting him with several elbow drops, causing Punk to bleed from the mouth.[20][21]

In a continuation of their personal rivalry, WWE Tag Team Champions Matt Hardy and Montel Vontavious Porter (MVP) came out to have a pizza-eating contest. The contest was moderated by ECW color commentator Tazz and also featured Maria and Melina as scorekeepers. Hardy won the contest two slices to none.[20][21]

Up next was the second WWE Championship match of the evening as Triple H defended his newly-won title against Umaga. Triple H won the match and kept the championship after hitting Umaga with a pedigree.[20][21]

Friday Night SmackDown! was represented in the next match as Rey Mysterio took on Finlay. The referee ended the match after Finlay snapped his head off the floor. However, while being taken away on a stretcher, Finlay jumped out and attacked Mysterio.[20][21]

Backstage, Triple H was having his ribs iced down when McMahon came in to inform him that Orton was invoking his automatic rematch clause for the WWE Championship, and that the match would be taking place later that night. In addition, the match would be Last Man Standing, Orton's originally scheduled match against Cena.[20][21]

The fourth championship match of the night was a rematch from Unforgiven, with Women's Champion Candice Michelle defending the title against Beth Phoenix. Phoenix pinned Michelle after a cradled suplex, winning the Women's Championship for the first time.[20][21]

SmackDown!'s main event saw Batista defend the World Heavyweight Championship against The Great Khali in a Punjabi Prison match. While locked in the inner cage, neither competitor was able to escape through one of the four trap doors. Khali was able to escape the inner cage first. However, while climbing the outer cage, Batista, who had by this time reached the top of the inner cage, jumped to the outer cage to pull even with Khali. In a head-to-head race, Batista was able to reach the floor first, winning the match, and keeping his championship.[20][21] 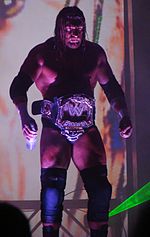 Triple H won his sixth WWE Championship at No Mercy

The main event of the evening saw a rematch from the start of the show, with Triple H defending the WWE Championship against former champion Randy Orton in a Last Man Standing match. The only way to win the match was to beat up the opponent so much that they could not answer the referee's ten-count. This was Triple H's third match of the evening, and Orton's second. In the end, Orton hit the RKO on Triple H over an announce table, and Triple H could not answer the ten-count. Orton won the WWE Championship for the second time of the night, and Triple H's eleventh world title reign lasted a little over two hours.[20][21]

The following night on RAW, Shawn Michaels returned after a five-month layoff to resume his feud with Randy Orton,[22] who originally injured him back at Judgment Day.[23] This feud also saw the inclusion of Mr. Kennedy and Jeff Hardy, who, along with Michaels, were named to a fan ballot to find out who was Orton's opponent for the WWE Championship at Cyber Sunday.[24] Michaels won the ballot, but failed to win the championship.[25]

Batista resumed his feud with The Undertaker after Taker interfered in a number one contenders match between Finlay and Rey Mysterio.[26] He was subsequently named the top contender, which brought about a Batista vs. Taker match for Cyber Sunday, with Steve Austin winning a fan poll to become the special guest referee.[27]

Candice Michelle used her rematch clause for the WWE Women's Championship on the October 22 version of Raw in a Two out of three falls match. Beth Phoenix got the upperhand and the first pinfall. Candice eventually got control in the match, but lost it after a botched move from the top rope, causing her to fall on her neck, shoulder and face. As a result, Candice suffered a cracked clavicle and Phoenix retained the title.[28][29]