Turkish style round pizza known as Lahmacun from Gaziantep 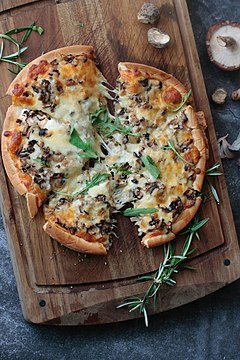 Pizza is a type of food that was created in Italy. It is made with different toppings. Some of the most common toppings are cheese, sausages, pepperoni, vegetables, tomatoes, spices and herbs and basil. These toppings are added over a piece of bread covered with sauce. The sauce is most often tomato-based, but butter-based sauces are used, too. The piece of bread is usually called a "pizza crust". Almost any kind of topping can be put over a pizza. The toppings used are different in different parts of the world. Pizza comes from Italy from Neapolitan cuisine. However, it has become popular in many parts of the world.[1]

The origin of the word Pizza is uncertain. The food was invented in Naples about 200 years ago. It is the name for a special type of flatbread, made with special dough.[2] The pizza enjoyed a second birth as it was taken to the United States in the late 19th century.

Flatbreads, like the focaccia from Liguria, have been known for a very long time. Pizzas need to be baked at temperatures of 200–250 °C. Hardly any household oven could reach such temperatures at the time. Because of this, the pizza was made at home, and then given to the town bakery to bake. In June 1889, the Neapolitan chef Raffaele Esposito created the "Margherita" in honour of Queen Margherita, and was the first pizza to include cheese. [3]

Pizza was brought to the United States with Italian immigrants in the late nineteenth century;[4] and first appeared in areas where Italian immigrants concentrated. The country's first pizzeria (place that focuses in pizza), Lombardi's, opened in 1905.[5] Veterans returning from World War II's Italian Campaign were a ready market for pizza.[6] Since then, pizza consumption has increased in the U.S. Pizza chains such as Domino's, Pizza Hut, and Papa John's, have outlets all over the nation. Thirteen percent of the U.S. population eats pizza on any given day. [7]

In the 20th century, pizza has become an international food. The toppings may be quite different depending on the local tastes. These pizzas consist of the same basic design. They also include many types of ingredients such as anchovies, egg, pineapple, banana, coconut, sauerkraut, eggplant, kimchi, lamb, couscous, chicken, fish, and shellfish. Sometimes, meats prepared in styles such as Turkish lamb, Doner or chicken tikka masala, and non-traditional spices such as curry and Thai sweet chili are added too. Pizzas can also be made without meat for vegetarians, and without cheese, for vegans.

Authentic Neapolitan Pizza Margherita, the base for most kinds of pizza. 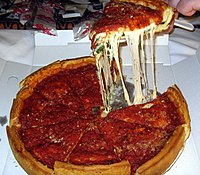 Neapolitan pizza (pizza Napoletana). Authentic Neapolitan pizzas are made with local ingredients like San Marzano tomatoes, which grow on the volcanic plains to the south of Mount Vesuvius and Mozzarella di Bufala Campana, made with the milk from water buffalo raised in the marshlands of Campania and Lazio in a semi-wild state (this mozzarella is protected by its own European law).

The genuine Neapolitan pizza dough consists of Italian flour, natural Neapolitan yeast or brewer's yeast, salt and water.The dough must be kneaded by hand or with a low-speed mixer. After the rising process, the dough must be formed by hand without the help of a rolling pin or other mechanical device, and may be no more than 3 mm (1/8 in) thick.

Lazio style: Pizza in Lazio (Rome), as well as in many other parts of Italy is available in 2 different "flavors": 1) In take-away shops so-called "Pizza Rustica" or "Pizza a Taglio". Pizza is cooked in long, rectangular baking pans and relatively thick (1–2 cm). The crust similar to that of an English muffin and mostly cooked in an electric oven. When purchased, it is usually cut with scissors or knife and priced by weight. 2) In Pizza Restaurants (Pizzerias) it is served in a dish in its traditional round shape.

Other types of Lazio-style pizza include:

Sicilian-style pizza has its toppings baked directly into the crust. Pizza Hut's Sicilian Pizza, introduced in 1994, is not an authentic example of the style as only garlic, basil, and oregano are mixed into the crust,it's sold in the restaurant chain Pizza Hut.

White pizza (pizza bianca) uses no tomato sauce, often substituting pesto or dairy products such as sour cream. Most commonly, especially on the East Coast of the United States, the toppings consist only of mozzarella and ricotta cheese drizzled with olive oil and basil and garlic. In Rome, the term pizza bianca refers to a type of bread topped only with olive oil.

Pizza al Taglio, in a shop in Rome.

Pizza al taglio or pizza al trancio was invented in Rome. It is usually rectangular, and sold by weight.[8] The name translates to pizza by the slice. Stands selling pizza al taglio are common in Italy. It is also common in other areas of the world where there are many Italian immigrants. 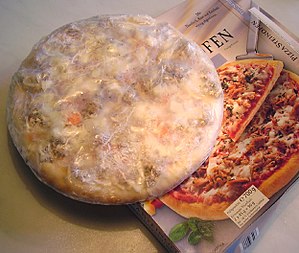 Frozen pizza is pizza that has been prepared beforehand, and is then deep-frozen, to be distributed in supermarkets. It is among the most successful and popular types of convenience food. It is prepared slightly differently: First the dough with the tomato sauce is pre-cooked, then the toppings are added. The dough of frozen pizza is different. Its dough also contains modified starch and leavening agents. This makes it possible to cook the pizza directly, without first defrosting it. One main frozen pizza brand is Digiorno.