Curry is also a mixture of different spices, mainly used outside India, Pakistan and Bangladesh; in India, such mixtures are freshly made; people usually call them Masala. The key ingredient for curry is turmeric. 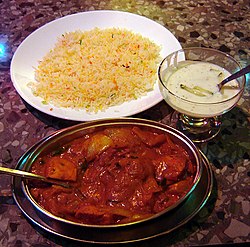 Curry (from Tamil kari) is the English word for any of a general variety of spiced dishes, best known in Indian, Bangladeshi, Sri Lankan, Indonesian, Malaysian, Pakistani, Thai, and other South Asian and Southeast Asian cuisines, though curry has been adopted into many other cuisines. Curry first came from India. The idea of curry was later brought to the West by British colonialists in India from the 18th century. Dishes that are often called curries in Europe and America are rarely called curries in the native language.