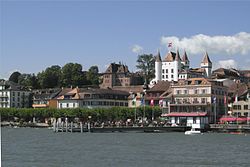 Nyon is a municipality in the district of Nyon in the canton of Vaud in Switzerland. It is found 25 kilometers north of Geneva, and is part of the Geneva metropolitan area. The town has (as of 2006) 17,267 people.

Nyon was built by the Romans between 50 BCE and 44 BCE, and was called "Colonia Iulia Equestris" or "Colonia Equestris Noiodunum". It grew to be one of the most important Roman colonies in modern-day Switzerland, with a forum, a basilica and an amphitheater that was discovered in 1996.

Today, Nyon has a high school (Gymnase de Nyon), a hospital, a movie theatre, hotels, restaurants, cafes and a popular tourist attraction - the castle. In the last week of July each year, Nyon hosts the Paléo Festival - a huge music festival.