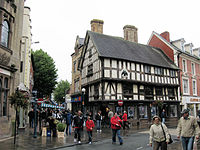 Oswestry (Welsh: Croes-Oswallt), is one of the United Kingdom's oldest border towns. It is the largest market town and civil parish in Shropshire, England, close to the Welsh border. Oswestry is the third largest town in Shropshire, following Telford and Shrewsbury. The 2001 Census recorded the population of the civil parish as 15,613, and the urban area as 16,660. In 2008 the latter figure was estimated to have increased to 17,116.[1] The town is five miles (8 km) from the Welsh border, Oswestry has a mixed Welsh and English heritage.[2] It is the home of the Shropshire libraries' Welsh Collection.[3]

The Battle of Maserfield is thought to have been fought here in 642 between Penda of Mercia and Oswald of Northumbria.[4] Oswald was killed in this battle.[5] According to legend, one of his arms was carried to an ash tree by a raven.[6] Miracles were then attributed to the tree (as Oswald was considered a saint).[6] The Welsh who held this area at the time called it Croes-Oswellt (meaning Oswald's cross).[7] During the Anglo-Saxon period the town was called Oswald's Tree. Later this became Oswestry.[7]