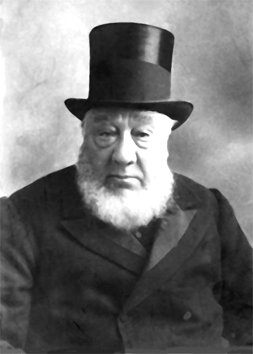 Stephanus Johannes Paulus Kruger (or just Paul Kruger) (10 October 1825–14 July 1904) was the president of the South African Republic (sometimes incorrectly referred to as the Transvaal) from 1883 to 1900.[1][2][3] He became famous for leading the Boers against the British at the time of the Second Boer War.

Kruger grew up on his grandfather's farm. He worked as a commando (a soldier defending farms), and became a respected leader.

In 1877 the British Army took control of Transvaal, and Kruger became the leader of the resistance (the people who wanted to fight British control). On 30 December 1880, the government of the South African Republic (Transvaal) elected (chose) him to be president. In 1881 Kruger negotiated (talked with the enemy) to agree the peace. Kruger travelled to Europe, where many people respected him.

The Second Boer War began in 1899, and Kruger had to escape to Europe in October 1900. He moved to Clarens in Switzerland, where he died in 1904. People took his body back to South Africa and buried him in Church Street Cemetery in Pretoria