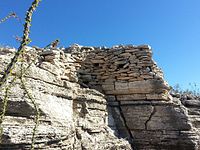 Ruins of a village built by Hohokam people about 1000 years ago at Lake Pleasant Regional Park in Peoria, Arizona. 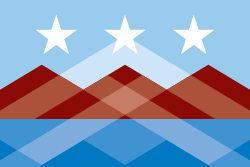 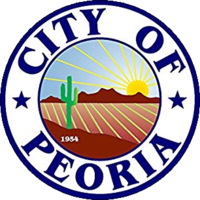 Peoria is a city in Maricopa and Yavapai counties in the US state of Arizona. Most of the city is in Maricopa County. The the northern part is in Yapavai County. It is a major suburb of Phoenix. It was named for Peoria, Illinois because that is where many of the early settlers came from.[1]

In the 2010 United States Census, 154,065 people lived in the city.[2] Peoria is the the ninth largest city in Arizona.[1] Peoria has a Mayor–council government; a mayor and six councilmen who are all elected.[1]

Small groups of hunter-gatherers called Paleo-Indians moved through what would later become Peoria.[3] Spear points found in Peoria date from 10,000–8,000 BC and show there was hunting activity here.[3] About 1500 BC, there was farming here which indicates that semi-nomadic peoples used the area.[3] From about 1–500 AD the peoples here settled into two areas. There were crops being raised here in the Peoria area during the spring and summer.[3] At other times they lived in the upland areas where they gathered seeds, cholla, and cactus fruits.[3]

There is evidence that the Hohokam lived here before 1150 AD.[3] They built their houses out of wattle and daub.[3] Later they used adobe and stone.[3] They vanished after about the mid-1400s.[3] They left almost no clues as to where they went or what happened to their civilization.[3] As late as the 1870s, small bands of Yavapai were farming small pieces of land in the area depending on surface runoff and springs for water.

European and American explorers discovered gold in 1863 near Wickenburg, Arizona. This caused a conflict with the Yavapai in the area. Ranchers were attracted to the area because of the grasslands for cattle. Relations with the Yavapai turned to war over the land.[3] This was in part because the American Civil War caused the Army to leave the area.[4] When the army returned, the Yavapai were eventually removed to a reservation.[4]

For about 13 years, the area around what would become Peoria lay vacant.[4] In the late 1880s, four farming families moved to Peoria from Peoria, Illinois, naming the new town after the town they came from.[5] From that time Peoria steadily grew as a farming community. Peoria incorporated in 1954.[5]

Lake Pleasant Regional Park is a large recreational area that is in Peoria.[1] It serves the entire Phoenix area. Its main feature is the 10,000 acre (40 km² or 15.6 mi²) Lake Pleasant.[1] It is an artificial reservoir that has campgrounds, boating and fishing.[1]

Peoria also is home the Peoria Sports Complex.[1] It is the official spring training facility for the Seattle Mariners and the San Diego Padres.[1] It has the Challenger Space Center and Canyon Raceway.[1]