Peter Henry Fonda (February 23, 1940 – August 16, 2019) was an American actor.[2][3] He and Dennis Hopper starred in the motorcycle movies, The Wild Angels and Easy Rider.[4] He appeared in many other movies, including Ulee's Gold, in which he was nominated for an Academy Award, Thomas and the Magic Railroad and The Passion of Ayn Rand. 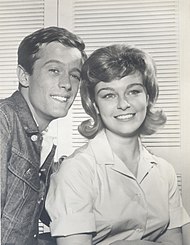 Fonda with Patty McCormack in The New Breed.