Plauen is the biggest city of the Vogtlandkreis in the southwest of Saxony. It is the fifth-largest city in the state. Only Leipzig, Dresden, Chemnitz and Zwickau are larger.

Plauen was a Kreisfreie stadt until July 2008. Since 1. August 2008 Plauen ist Part of the Vogtlandkreis. 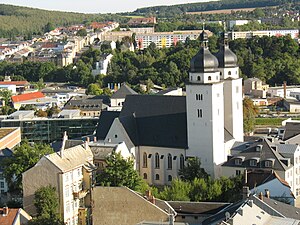 Plauen was already settled in the Bronze Age, but the first written record of the city was in 1122, when the oldest church (named Johanniskirche) was build. About 1224 Plauen has get the Town privileges. 1632 a big part of the city was destroyed in the Thirty Years' War. Since about 1830 Plauen grow because of the textile-industry. In the Second World Warabout three quarter of the city were destroyed by the United States Army Air Force and the Royal Air Force.

1989 Plauen was the first city in the German Democratic Republic were happens a big demonstration against the Government. This leads to the Wende.

According to the statistics office of the Free State of Saxony, on 31 December 2009 Plauen's population was 66,412.