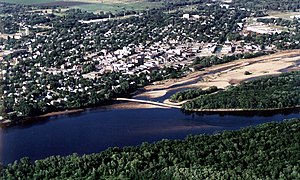 Portage was named for the Fox-Wisconsin Waterway. It is a portage between the Fox River and the Wisconsin River. It was found by Jacques Marquette and Louis Joliet during their discovery of a route to the Mississippi River in 1673. The slogan of the city is "Where the North Begins."

Portage is the largest city outside of Dane County in the Madison Metropolitan Area.

Portage is in the Wisconsin River valley. The city is surrounded by prairies and grasslands.

The Native American tribes that once lived here, and the European settlers that moved here later, used the lowlands between the Fox and Wisconsin Rivers as a natural "portage". The French fur traders called the place "le portage". This later became the name of the community. As a portage, this community grew as a center of commerce and trade. Later, a canal was built to support this trade.

By the end of the 17th century, the Fox-Wisconsin waterway was the major fur trade path between Green Bay and Prairie du Chien. In the 1780s and 1790s, traders built their warehouses at each end of The Portage. In the early 19th century, Portage was mostly populated by Metis.[7] In 1828, the federal government saw the economic importance of The Portage. They built Fort Winnebago at the Fox River end. Portage became the county seat in 1851. The community incorporated as Portage City in 1854.