Portmeirion is a tourist village in Gwynedd, North Wales. The village is in the community of Penrhyndeudraeth. Its is next to the River Dwyryd. It was created and built by Clough Williams-Ellis. He created and built it between the years 1925 and 1975. He wanted it to look like an Italian village. A charity owns it. Many movies and television shows were filmed there, including The Prisoner. 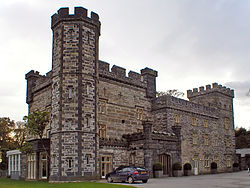 A photograph of Castell Deudraeth which is located at Portmeirion

Portmeirion looks a lot like the Italian city of Portofino. But, Clough Williams-Ellis, who created Portmeirion, always said that it was not based on the city of Portofino. He said he did want it to look like it was a place near the Mediterranean, though.[1] He designed and built the village between the years of 1925 and 1975. The mix of architecture in the village is believed to have influenced postmodernism architecture in the late 1900s.

An old estate used to be located on the property before Portmeirion was built. It was called Aber Iâ (Welsh: Ice estuary). The hotel and three cottages, which are named "White Horses", "Mermaid", and "The Salutation", are part of the original estate. It was built in the 1850s. Before the estate, there was a foundry and a boatyard on site. There is also an old site which has a small group of remains from a mediaeval castle nearby.

In 1931, Williams-Ellis bought a Victorian mansion from his uncle Sir Osmund Williams, Bt. It was called Castell Deudraeth. Williams-Ellis planned on having the mansion be a part of the hotel. Lots of problems and the war did not allow that to happen. Williams-Ellis loved the building a lot and did anything he could to make it a part of the hotel. He received money from the Heritage Lottery Fund, the European Regional Development Fund, and Wales Tourist Board. This money allowed him to finally open Castell Deudraeth as a hotel with 11 bedrooms and a restaurant on August 20, 2001. Bryn Terfel performed at the opening.

There are a lot of rhododendrons at Portmeirion, which are part of gardens that go throughout the land. The gardens were started before Williams-Ellis lived there. They were started by George Henry Caton Haigh. An English charity owns Portmeirion, today. It is still a hotel. There is also a cafe, cottages for rent, shops, a tearoom, and a restaurant.

Lewis Mumford has written a lot about Portmeirion. He wrote a lot about it in his book, The Highway and the City in 1964.[2] 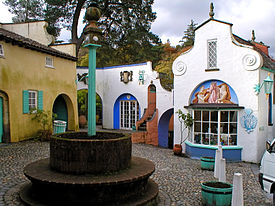 A lot of people have found inspiration in Portmeirion. Noël Coward wrote the play Blithe Spirit while staying in a cottage at Portmeirion. Frank Lloyd Wright, Gregory Peck, Ingrid Bergman, and Paul McCartney have visited. Jools Holland visited it while he was making a TV show called The Tube. He loved Portmeirion so much that he used its type of architecture in building his recording studio and house in Blackheath.

The village is used in many movies and television shows to look like the shows are taking place in an exotic place in Europe. Episodes of Danger Man, Doctor Who, and The Prisoner have been filmed at Portmeirion. Many bands and musicians have recorded videos, songs, and held concerts there to do with The Prisoner, including Supergrass, Iron Maiden, XTC, Siouxsie and the Banshees, and a music festival called Festival N°6.