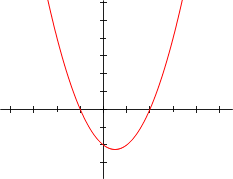 A quadratic equation graphed in the coordinate plane.

A quadratic equation is an equation in the form of [math]ax^2+bx+c=0[/math], where a is not equal to 0. It makes a parabola (a "U" shape) when graphed on a coordinate plane.

When people work with quadratic equations, one of the most common things they do is to solve it. This means to find the points on a coordinate grid where the graphed equation crosses the x-axis, or the horizontal axis. These points are called the "zeroes", or "roots", of a function. In other words, to solve the equation means to find the value of x so that [math]ax^2+bx+c=0[/math], where the coefficients, a, b, and c, are all real numbers. There are different ways to find out the value of x. Plotting the function on a graph is one way. In the picture on the right, the function crosses the x-axis at the points [math](-1, 0)[/math] and [math](2, 0)[/math].

Graphing a quadratic equation makes it is very easy to find the roots, but it is not always convenient. So there are different ways to do this using maths.

There are five steps to solve a quadratic equation by completing the square:

Although completing the square can be used to solve many quadratic equations, it does not work with every equation. There is a way to find the value of x that makes the equation true by replacing the values in a formula with the coefficients from the quadratic equation. This is called the "quadratic formula", which is:

The factored form of this equation is y = a(x − s)(x − t), where s and t are the zeros, a is a constant, and y and the two values of x are ordered pairs which satisfy the equation.[3]

Proof of the formula

The quadratic formula can be found out, or proved, using the same completing the square method from above, only by using a, b, and c instead of actual values and using algebra to find the value of x. Here is how:

Now that the value of x has been found out, the values of a, b, and c are replaced with the corresponding coefficients from the original equation. For example, going back to the second example, [math]5x^2-4x-2=0[/math] , it can be seen that the values are [math]a=5[/math], [math]b=-4[/math], and [math]c=-2[/math]. By putting these values into the quadratic formula and solving, the result is:

Unlike the other methods described above, the quadratic equation will work with every possible value for a, b, and c, even if there are no "real roots", that is, places where the graph of the function touches the x-axis.

The value inside the square root, that is, [math]b^2-4ac[/math], is known as the discriminant. It can tell whether the roots are real or Imaginary. There are three cases: