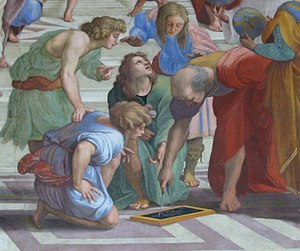 Ancient Greek mathematician Euclid (holding calipers), 3rd century BC, as imagined by Raphael in this detail from the School of Athens (1509–1511)

Mathematics is the study of numbers, shapes and patterns. The word comes from the Greek word "μάθημα" (máthema), meaning "science, knowledge, or learning", and is sometimes shortened to maths (in England, Australia, Ireland, and New Zealand) or math (in the United States and Canada).[1] The short words are often used for arithmetic, geometry or simple algebra by students and their schools.

Mathematics includes the study of:

Mathematics is useful for solving problems that occur in the real world, so many people besides mathematicians study and use mathematics. Today, some mathematics is needed in many jobs. People working in business, science, engineering, and construction need some knowledge of mathematics.[2][3]

Mathematics solves problems by using logic. One of the main tools of logic used by mathematicians is deduction. Deduction is a special way of thinking to discover and prove new truths using old truths. To a mathematician, the reason something is true (called a proof) is just as important as the fact that it is true, and this reason is often found using deduction. Using deduction is what makes mathematics thinking different from other kinds of scientific thinking, which might rely on experiments or on interviews.[4]

Logic and reasoning are used by mathematicians to create general rules, which are an important part of mathematics. These rules leave out information that is not important so that a single rule can cover many situations. By finding general rules, mathematics solves many problems at the same time as these rules can be used on other problems.[5] These rules can be called theorems (if they have been proved) or conjectures (if it is not known if they are true yet).[6] Most mathematicians use non-logical and creative reasoning in order to find a logical proof.[7]

Sometimes, mathematics finds and studies rules or ideas that we don't understand yet. Often in mathematics, ideas and rules are chosen because they are considered simple or neat. On the other hand, sometimes these ideas and rules are found in the real world after they are studied in mathematics; this has happened many times in the past. In general, studying the rules and ideas of mathematics can help us understand the world better. Some examples of math problems are addition, subtraction, multiplication, division, calculus, fractions and decimals. Algebra problems are solved by evaluating certain variables. A calculator answers every math problem in the four basic arithmetic operations.

Areas of study in mathematics

Mathematics includes the study of numbers and quantities.It is a branch of science that deals with logic of shape,quantity and arrangement. Most of the areas listed below are studied in many different fields of mathematics, including set theory and mathematical logic. The study of number theory usually focuses more on the structure and behavior of the integers rather than on the actual foundations of numbers themselves, and so is not listed in this given subsection.

Many areas of mathematics study the structure that an object has. Most of these areas are part of the study of algebra.

Some areas of mathematics study the shapes of things. Most of these areas are part of the study of geometry.

Some areas of mathematics study the way things change. Most of these areas are part of the study of analysis.

Applied mathematics uses mathematics to solve problems of other areas such as engineering, physics, and computing.

These are theorems and conjectures that have greatly changed mathematics.

Progress in understanding the nature of mathematics also influences the way mathematicians study their subject.

History and the world of mathematicians

Mathematics in history, and the history of mathematics.

There is no Nobel prize in mathematics. Mathematicians can receive the Abel prize and the Fields Medal for important works.[8][9]

The Clay Mathematics Institute has said it will give one million dollars to anyone who solves one of the Millennium Prize Problems.