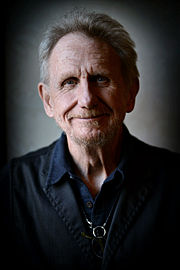 René Murat Auberjonois (June 1, 1940[1] – December 8, 2019) was an American movie, television, stage, and voice actor. He was known for his roles as Father Mulcahy in movie version of M*A*S*H, as Chef Louis in The Little Mermaid, and as Odo in the Star Trek: Deep Space Nine television program. He won a Drama Desk Award and a Tony Award.[2]

Auberjonois was born on June 1, 1940 in New York City, New York. He married Judith Mihalyi in 1963. They had two children.