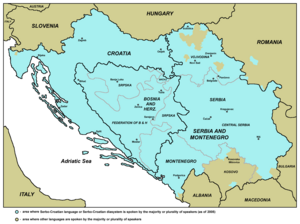 Serbo-Croatian language on the Balkan peninsula, in 2005 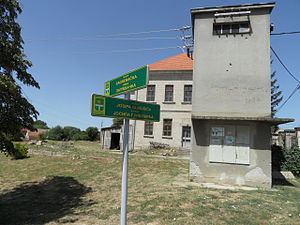 Serbo-Croatian is the name of a Slavic language, which is spoken in modern-day Croatia, Serbia, Bosnia and Herzegovina, and Montenegro. Between 1954 and 1992, it was one of the official languages of Yugoslavia (the others were Slovenian and Macedonian). The term Serbo-Croatian was first used in the 1830s. Today, people often speak about Croatian, Serbian, Bosnian and Montenegrin languages. Research has also shown that what is called Serbo-Croatian language, is in fact a number of slightly different dialects or languages, and that a "Serbo-Croatian language" does not exist. People speaking one of the dialects easily understand other people speaking a different dialect. Also, people in Serbia use the Cyrillic alphabet to write the language, while people in other parts use the Roman alphabet.