A serpopard is a mythological animal, often seen carved on cosmetic palettes (used for mixing antimony as eye shadow), during the Old Kingdom of Egypt. These palettes were made in the earliest days of history, before the pharaohs. 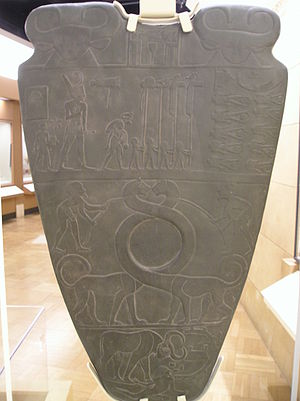 A serpopard looks like a leopard; however it has a very long neck unlike a leopard. In the carved pictures, they are seen being led by ropes and harnesses while they serve the Egyptians as domesticated animals. Skilled Egyptian artists always carved real animals in exactly the right shape, but the serpopard is thought to be only a mythological creature. In a later time, a similar creature would be shown in the art of Sumer and Elam.[1]