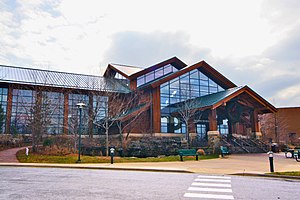 The Wonders of Wildlife Museum and Aquarium, Springfield, Missouri

Springfield is the third largest city in the state of Missouri and the county seat of Greene County.[1] According to the 2010 census data, the population was 159,498, an increase of 5.2% since the 2000 census.[2] The Springfield Metropolitan Area has a population of 436,712 and includes the counties of Christian, Dallas, Greene, Polk and Webster. Springfield's nickname is the Queen City of the Ozarks and is known as the Birthplace of Route 66 as well as the home of several universities including Missouri State University.

Springfield’s economy is based on health care, manufacturing, retail, education and tourism.[3] With a Gross Metropolitan Product of $13.66 billion in 2004, Springfield's economy makes up 6.7% of the Gross State Product of Missouri.[4]

Total retail sales exceed $4.1 billion a year in Springfield and $5.8 billion in the Springfield MSA. Its largest shopping mall is Battlefield Mall. According to the Springfield Convention & Visitors Bureau, an estimated three million overnight visitors and millions of day-trippers visit the city annually. The city has more than 60 lodging facilities and 6,000 hotel rooms. The Convention & Visitors Bureau spends more than $1 million annually marketing the city as a travel destination.

Positronic, Bass Pro Shops, John Q. Hammons Hotels & Resorts, BKD, Noble & Associates, Prime, Inc., and O'Reilly Auto Parts have their national headquarters in Springfield.[5] In addition, two major American Christian denominations are headquartered in Springfield: General Council of the Assemblies of God in the United States of America (one of the largest of the Pentecostal denominations) and Baptist Bible Fellowship International (a fundamentalist Baptist denomination with roots to J. Frank Norris).