Stegodon is a genus of the extinct subfamily Stegodontinae of the order Proboscidea.[1] Stegodonts were present from 11.6 million years ago (mya) to the late Pleistocene. There are unconfirmed records of regional survival until 4,100 years ago. Fossils are found in Asian and African strata dating from the late Miocene. They lived in large parts of Asia, East and Central Africa and North America during the Pliocene and Pleistocene epochs.[1][2]

Some Stegodon species were among the largest of all elephants. Some adults were 13 feet (4 m) high at the shoulder and 26 feet (8 m) long, not including 10 feet (3m) long nearly straight tusks. Some were much smaller due to island dwarfism.

The teeth of Stegodon show that it was mainly a browser. 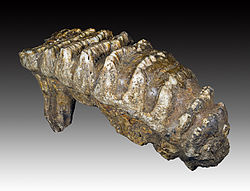