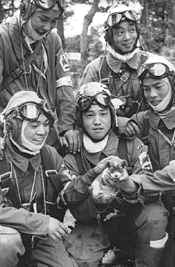 Kamikaze pilots, aged 17, with a puppy

A suicide attack is an attack where the attacker (either one person or a group of people) plans on killing people and/or destroying property while also dying in the process. In a suicide attack, the attacker dies as a result of the attack, for example in an explosion or a crash.

Nowadays, suicide attacks are often done with a vehicle or an explosive material such as a bomb (a suicide bombing), or sometimes both (i.e. a car filled with explosives). If everything goes according to plan, the attacker is killed as soon as their attack is complete (when their vehicle crashes or their bomb detonates).

Suicide attacks are often done in a crowded place so that as many people as possible are killed. They are common in the Middle East and South Asia. Most attacks on Israel, carried out by Hamas or other Palestinian terrorist groups are suicide bombings.