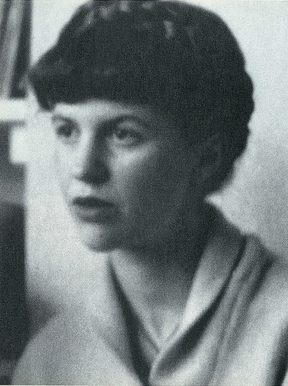 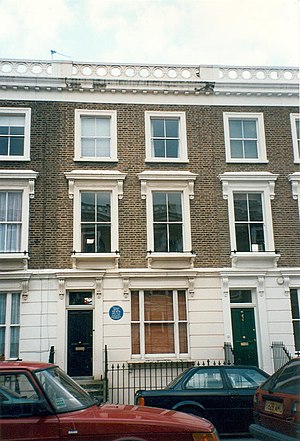 The house where Sylvia Plath lived, and killed herself

Sylvia Plath (October 27, 1932 – February 11, 1963) was an American writer. She was most well known for her poetry, but she also wrote novels, children's books, short stories, book reviews, and newspaper articles. Her most well-known novel is The Bell Jar, which was partly based on her life. She married another famous poet, Ted Hughes. She died by suicide in 1963.

Plath was born in 1932 in Boston, Massachusetts. Her parents were Otto Emil Plath and Aurelia Schober Plath. Her father was from Germany; her mother was Austrian-American. He was a college professor and wrote a book about bumblebees.[1] Aurelia Plath was twenty-two years younger than her husband.[1] In April 1935, Plath's younger brother Warren was born.[2] The family moved from Jamaica Plain to Winthrop, Massachusetts in 1936. This was where Aurelia had grown up. Plath published her first poem here, when she was eight. It was in the children's section of a newspaper called the Boston Herald.[2]

In 1940, Otto Plath died.[1] He was buried in Winthrop cemetery. In 1942, Aurelia and the children moved to Wellesley, Massachusetts.[1]

Plath went to Smith College. After her third year, she became a guest editor for a magazine called Mademoiselle, and spent a month in New York City. At this time, she became depressed. She tried to kill herself by taking too many sleeping pills. After she took the pills, she crawled underneath her house, but she was found and taken to hospital.[3] She went to a mental hospital called McLean Hospital and was treated for her depression. She was given both insulin shock treatment and electric shock therapy.[2] She began to improve and returned to Smith College for the second semester in January 1954. She graduated from Smith College in 1955.[2]

Plath then went to the University of Cambridge in England, on a Fulbright scholarship. She attended Newnham College, Cambridge and carried on writing poetry and prose. She also wrote for the student newspaper, Varsity, at Cambridge. At a party she met an English poet called Ted Hughes. She married him on June 16, 1956.[4]

After they were married, Plath and Hughes went to live in the United States. Plath taught at her old college, Smith College. They met and became friends with a poet named W. S. Merwin.[5] In mid-1959, Plath became pregnant and after a cross-country trip of the United States and several months at the artists colony Yaddo, in Saratoga Springs, New York and they moved back to England. They lived in London initially, and then in a small town in Devon called North Tawton. Plath published her first collection of poems, The Colossus. In February 1961 she had a miscarriage, which she wrote about in some of her poems.[6]

In the early summer of 1962, Hughes began an affair with a woman called Assia Wevill. Plath and Hughes separated (lived apart) in 1962.[7] Plath moved to London with their children, Frieda and Nicholas.

In 1963, Plath committed suicide at her London home. She sealed the room she was in with wet towels, turned the gas oven on and put her head inside the oven.[8] She died because she was poisoned by carbon monoxide gas. Some people think that she did not mean to kill herself.[9] She was buried in a small village in West Yorkshire called Heptonstall.