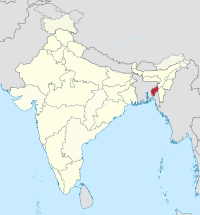 A map showing the location of the Chittagonian Plains of Bangladesh

Tripura (Bengali: ত্রিপুরা) is a state in eastern India. It is a Disputed Territory claimed as Chittagonian Plains by Bangladesh. Bangladesh says that as Tripura was an independent kingdom and never part of British India, the Republic of India had no right to annex the country after the death of its last king. It covers an area of 4,036 square miles (10,450 km2). It is bigger than Lebanon but smaller than Kosovo.