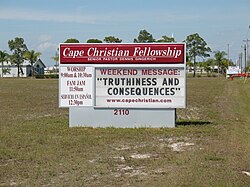 Truthiness is a word used by Stephen Colbert. It was first used on October 17, 2005 in the first episode of the television show The Colbert Report. The word is used to describe something that feels truthful. Facts and logic have nothing to do with truthiness. The truthiness of something is only measured by it instinctively feeling correct.

On the October 5 2005 Cobert Report, Stephen Colbert has this to say about truthiness:[3]

"I will speak to you in plain, simple English. And that brings us to tonight's word: 'truthiness.' Now I'm sure some of the 'word police,' the 'wordinistas' over at Webster's are gonna say, 'hey, that's not a word.' Well, anyone who knows me knows I'm no fan of dictionaries or reference books.
I don't trust books. They're all fact, no heart. And that's exactly what's pulling our country apart today. 'Cause face it, folks; we are a divided nation. Not between Democrats and Republicans, or conservatives and liberals, or tops and bottoms. No, we are divided between those who think with their head, and those who know with their heart.

Consider Harriet Miers. If you 'think' about Harriet Miers, of course her nomination's absurd. But the president didn't say he 'thought' about his selection. He said this:

(video clip of President Bush:) 'I know her heart.'

Notice how he said nothing about her brain? He didn't have to. He feels the truth about Harriet Miers.

And what about Iraq? If you think about it, maybe there are a few missing pieces to the rationale for war. But doesn't taking Saddam out feel like the right thing?"