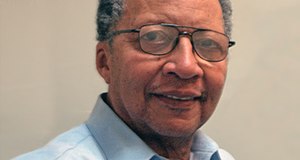 Myer was born in Martinsburg, West Virginia. He was raised in Harlem, New York City.