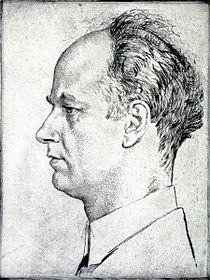 Wilhelm Furtwängler (born Berlin, 25 January 1886; died Baden-Baden, 30 November 1954) was a German conductor. He is thought of as one of the greatest conductors in history. Many people say that he is the best ever. The famous Italian conductor Arturo Toscanini said he was the world's best conductor other than himself.

Furtwängler was especially famous for conducting the music of famous German composers. His performances of Beethoven, Brahms, Bruckner, and Wagner are very well known and loved by many people.

Furtwängler was born on January, 25, 1886 in Berlin, Germany. He grew up in Munich, where his father was an archaeologist and professor. He started learning about music when he was very young. He learned to play the piano and was very talented. He also began writing music. He wrote several pieces before he was 20 years old. He kept writing music for the rest of his life, but his pieces never became very famous.

Furtwängler first started conducting as a young man. He wanted to conduct in order to perform his own music. However, he quickly became famous for conducting the music of others. The very first piece he conducted in public was the 9th Symphony of Bruckner. He conducted many orchestras before he finally became the leader of the world-famous Berlin Philharmonic Orchestra in 1922. Later, he also had many other important conducting jobs. The most important was the director of the Bayreuth Festival, a very famous German music festival.

The Nazis and World War II

When the Nazis took over Germany in the 1930s, Furtwängler was in an awkward position. He wanted to conduct some kinds of music that the Nazis did not like. He left some of his conducting jobs in protest when they did not let him perform. In 1936 he almost left Germany to live in the United States, where the New York Philharmonic Orchestra wanted him to conduct. However, the Nazis still thought he was a good conductor, and they kept him in Germany. He also wanted to stay to protect the German music from the Nazis. People in the United States did not like him for staying, even though he did not really like the Nazis.

During World War II Furtwängler continued to conduct the Berlin Philharmonic. He gave many very famous concerts during this time. But towards the end of the war, the Nazis became unhappy with him. He fled from Germany in 1945 and lived in Switzerland for several years. He did not conduct again for two years.

After the war, Furtwängler was still in a difficult position. The Allies thought that he had been a Nazi supporter because he had stayed in Germany. They put him on trial, but finally decided he was innocent. He was allowed to go back to conducting in 1947. Even though he was innocent, people in the US still did not like him. He was going to conduct the Chicago Symphony Orchestra, but he was not allowed to because people got angry about it.

Furtwängler gave many successful concerts after the war. He still conducted the Berlin Philharmonic and other famous orchestras in Europe. Furtwängler gave the most famous concert of his career in 1951. That year, he conducted Beethoven's 9th Symphony at the Bayreuth Festival. It was the first time that the festival had happened since the end of the war, six years before. Many people say that this concert was the greatest musical concert in history. Furtwängler finally died in 1954, when he was 68 years old.

Furtwängler had a very unusual way of conducting. His movements with the baton were very awkward and jerky. Some people said he looked "like a puppet on a string" when he conducted. He liked to slow down and speed up the music very often. Furtwängler believed that there was more to music than just the notes on the score. He felt it was the performer's job to make each performance something special. This meant that he often played the same piece in very different ways at different concerts. Even when he changed the way he played a piece, though, the music was thought to be very beautiful. He did not like conductors who just played the notes on the page without doing anything special with the music.

As a younger conductor, Furtwängler played music by many different composers. However, as he got older, he usually only played music by the great German composers. Some of his favorites were Beethoven, Brahms, Bruckner, and Wagner.

Furtwängler did not make many recordings in studios. Recording technology was still very new at the time and did not work well for recording long classical pieces at first. However, many of Furtwängler's concerts were recorded, especially during and after World War II. Today people think these are some of the best recordings of all time. His famous concert at Bayreuth in 1951 is one of these concert recordings.